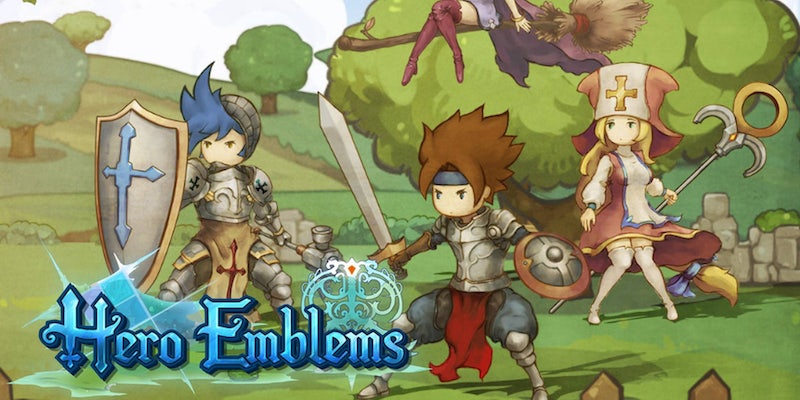 How to beat Hero Emblems

Want to save the kingdom? Our beginners guide to Hero Emblems will get you started.

Hero Emblems has become a bit of a phenomenon, staying on the iTunes charts over a year after its release and being named one of the best games of 2015. This blend of classic turn-based JRPG action, tile matching, and humor have built it a strong fanbase, but if you’re jumping in for the first time things might get a little confusing.

To help out new players we present to you the Daily Dot’s definitive guide to Hero Emblems. We won’t spoil any of the game’s big secrets, but with our help you’ll be saving the kingdom in no time.

What is your emblem and what does it do?

Your heroes will become your friends during your adventure, but at the start you can simply identify them by their emblems. Sword and stars are physical and magic attacks, shields are defense, and hearts are healing. Matching three of an emblem will activate a basic attack or defense power up. As the game goes on you’ll need to manage these resources, saving up hearts and shields for when you really need to refill your defenses.

If your defense bar is full matching shields will cause your defender to attack. It doesn’t do as much damage as the magic or sword emblems, but it’s worth keeping your defenses up at all times for the added damage.

Matching four emblems in a row creates a blue skill emblem, which uses your character’s basic skills when matched. There is also more powerful pink emblem which is created when five emblems are matched in a T or L shape. The pink emblem unleashes a more powerful skill attack or healing.

Matching five emblems will create the magic cross. You don’t need to match the magic cross, you can simply swap it with any emblem to use the corresponding hero’s special move.

These effects range from dropping meteorites on your enemies to massive power shields. Should you be lucky enough to have two at the same time swapping a magic cross with a magic cross will unleash every hero’s special skill at once. 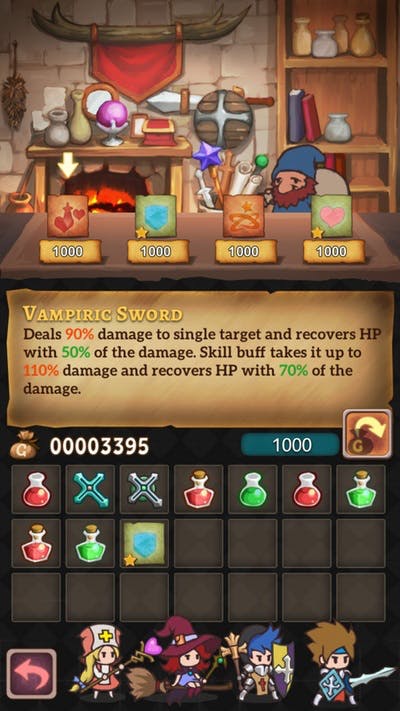 As you visit new towns you’ll find emblem upgrades in the local stores. Early on in the game when you’re grinding out some levels you should regularly stop back in the first town whenever you’ve raised 300 gold to upgrade your heroes.

Start with your healer first, then upgrade your sword, then your defenses, and finally upgrade your magic. It’s worth spending an hour to grind out gold pieces to make sure you’re ready for the early boss battles.

When you’ve purchased the best emblems available, stop by the items shop and make sure to invest in crosses. While potions come in handy in a pinch you’ll find plenty of them throughout the game. Crosses are rarer and absolutely invaluable because they help you deactivate the dreaded debuffs. What’s a debuff? Happy you asked.

Debuffing debuffs, or swearing at chains

A debuff is a status effect that will negatively affect one or more of your heroes during a battle. More than any other enemy type or attack, debuffs are the game’s way of spitting in your Cheerios and ripping your success away at the worst possible moment. Make sure you stock up on crosses and equip your healer with the most powerful anti-debuff items and spells that you can. Get Purify as soon as possible. A well-timed cross or healing skill is all the stands between you and defeat in most battles.

Debuffs break down into three basic groups: draining, annoying, and dangerous. Draining debuffs are the easiest to clear without a special skill or power up. Poison, fire, and lightning debuffs will hurt you each turn they’re on the board, but you can move these tiles to match them faster.

There are also spider and question mark debuffs which don’t immediately poison you, but can. To avoid the spider’s poison simply clear it as fast as possible. The question mark only appears when you’re fighting one specific boss, and it only activates if you try to clear it. Leave it alone and you won’t get poisoned by it.

Annoying debuffs are nasty little buggers you can’t move. Chains (and double chains which must be matched twice) and frozen emblems can only be cleared by matching them to surrounding blocks. Frozen emblems are easily the worst, since they can hide the emblem they’re effecting, forcing you to remember what’s hidden under the ice to clear the block if you hope to clear it without wasting a Purify spell or a cross.

Dangerous debuffs are where the game gets ugly. These debuffs either grow on their own or can only be cleared with Purify or by clearing emblem tiles beneath them so they drop off the board. The horned heart will actively heal your enemies, so drop it as soon as you can. Stone eyeballs turn your characters into stone, rendering their emblems useless. Thankfully this debuff can also be canceled by killing the enemy who cast it, but that’s easier said than done with frozen emblems.

Finally, we have the tentacles, easy to kill and dangerous because of it. Tentacles grow into the tiles around them, but because they’re easy to kill you may ignore them for one round too many while trying to damage your foes. Don’t let them get out of hand, and clear the danger before you find yourself missing half the board.

Throughout the dungeons and fields of the game you will discover chests, which can only be opened by dropping them off the board by clearing the emblem tiles beneath them. Focus on these chests, as you will have a limited number of turns to open them. Some chests will attack you if you don’t clear them in time, but most have potions, crosses, or skill emblems inside. They may seem like a distraction in the heat of battle but they can prove invaluable.

Combos are your friend

When it comes to strategizing in Hero Emblems, focus on combos as much as possible. Obviously matching two magic crosses and having your whole squad explode forth with magic and fury is the ideal, but smaller combos can still help you get more out of every turn.

If you can match two different kind of emblems at the same time each of those characters gets a turn, allowing you to heal and attack at the same time, for example. In addition, if you match two sets of the same emblem tile at the same time that hero gets two actions in addition to creating a skill emblem. Keep your eyes open, sometimes the saving miracle you’ve been praying for is sitting right in front of you. Don’t get lost in the action. Stay aware and you will find victory.

As you make your way through graveyards and dungeons you’ll be offered many alternating paths. Make a note of what directions you’re going in. Sometimes this will help you keep from walking in circles, but it’s worth replaying dungeons to try different paths. Sometimes you’ll discover a chest you missed the first go, with a powerful skill or item you’ll need later on.

We hope this spoiler-free strategy guide gives you the head start you’ll need to hit the ground running and save the kingdom. Hero Emblems requires a little grinding to succeed but at least the whole game is available without crippling in-app purchases or easy outs. Put in the time and your adventures will be rewarded.