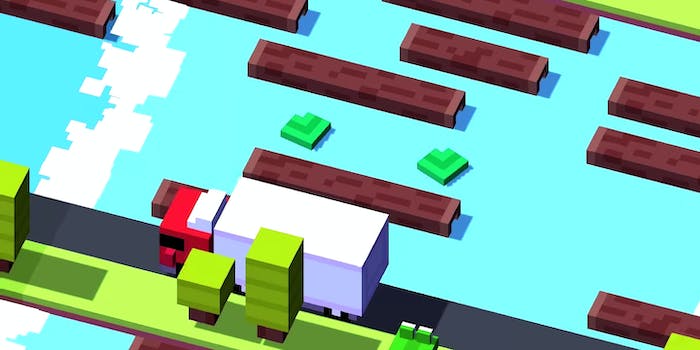 A guide to the Crossy Road app game

If you aren't already, you're going to be obsessed with Crossy Road.

Last week we wrote about Crossy Road, a simple, but frighteningly addictive new mobile game. This game is similar to Frogger and features some charming, arcade-style 3D graphics, one-handed game play, and a bevy of entertaining ways to smash your character. If you haven’t downloaded it yet, you probably should.

OK, now that you have it, you should know I was a complete failure when I started playing and you will be too, unless you’re some sort of Crossy Road savante or something. But! This guide might just give you the jumpstart you need to become a Crossy Road master.

Timing your forward progress is everything in this game. Hop ahead too quickly and you will likely make a move you’ll regret; chill out too long on the grassy patches and you’ll drift toward the bottom of the screen, where you will be swept up by some sort of giant bird of prey (a mutant Bald Eagle is my best guess), promptly ending your game. You’ve played Frogger before, you get it. If you haven’t… well you’re about to learn.

Speed can be your friend. You should always keep the first tip in 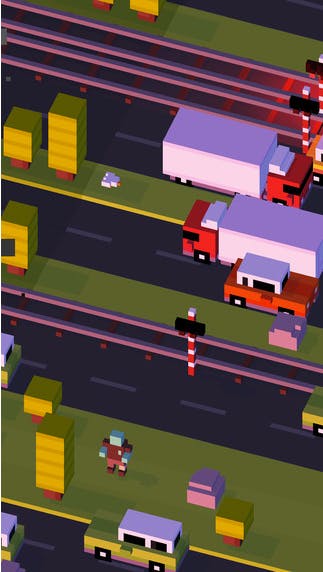 mind. However, opportunities to hop ahead 10 or 15 steps in a row will appear from time to time, especially early in a game, when things are a little slower. Don’t be afraid to take these chances. It’ll only take getting flattened by a semi a few times before you get a sense of when is an appropriate time to stop and reassess your surroundings. This stop and start strategy can be an effective one for keeping your pace and avoiding that mutant bald eagle.

Don’t get caught chasing coins. Coins will be scattered along your route. Don’t put too much effort into going after these, as they are worth only one coin and are liable to get you killed. There will be some easily accessible coins here and there, grab these if you can, but try not to stray too far side to side chasing after harder to reach coins.If you’re desperate for more, you can watch a short advertisement and earn 20 coins. And, If you really can’t wait to get your hands on some more coins, scroll down to the “hack” section at the bottom of this guide to find out how to score an unlimited number.

The Road. This is the most common obstacle. It should go without saying, but hanging out in the middle of the road will likely not end well. Instead, bide your time a bit from the safety of a grassy patch and make a run for it when you see a clear opportunity to get across all the lanes of traffic in one fell swoop. This might not be possible when the roads become six or eight lanes wide, but even in these situations, there should be better and worse moments to go. Patience is key here. 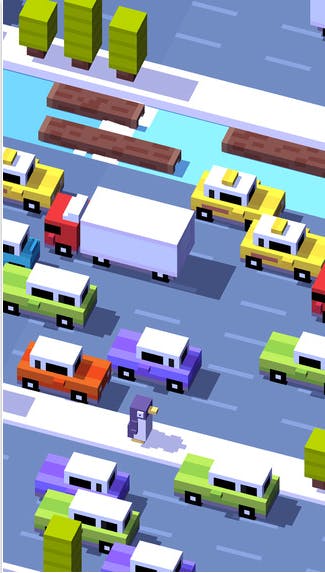 Train Tracks. The tracks aren’t such a big problem when you’re dealing with only one set at a time. A red light will come on two or three seconds before a train comes in, generally giving you enough time to adjust. It gets a little trickier when there are two or more lined up in a row and it becomes difficult to tell which red light is coming on and which track is safe to stand on for a second. Your best bet here is, once again, to be patient and wait for an opportune moment. If none of the lights are on when you start your run, you’ll be just fine.

The Stream. This one might be the most frustrating. You will have to navigate your way across to the other side on a series of floating logs 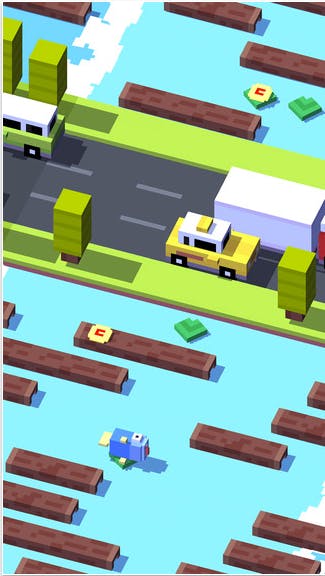 moving in both directions. To make matters worse, there are rapids to the right and left that will end your game if you stay on a log too long and find yourself caught in them. The best thing to do is to make sure you can’t see the rapids in your screen before hopping on the first log. If you do, try moving in the opposite direction until you can’t see them any more. Getting on a first log going in the opposite direction of the rapids will have the same effect. Doing either of these things will increase the likelihood that you catch another log and avoid ending up in the rapids before making it to the other side.

If you just can’t wait to unlock those animals and other characters available in the game, then this is probably the part you’re interested in. Given the simplicity of this game, there’s really only one hack to perform, which will grant you unlimited coins and unlock all the characters. There are many sources for this hack out there, but most seem to require that you take a survey and provide your email address and other personal information before downloading. Fortunately, the download provided here works very well and does not make you jump through any of these extra hoops. Below are a few simple steps, via YouTube user Ethan Colgan, which will have you fully stocked with coins in less than five minutes:

1. First, you will need to download and install iFunbox, or a similar program like iExplorer, for Windows or Mac.

4. Connect your device to your computer via USB port. 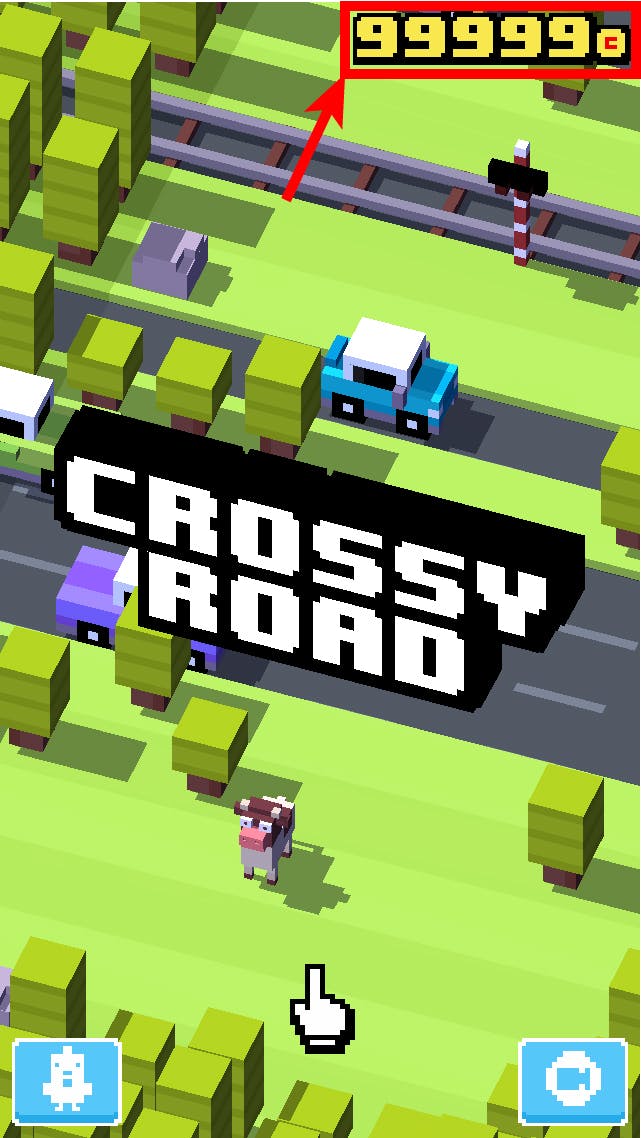 6. Drag the downloaded file from step two into your preferences folder and replace the file with the same name. The file you are replacing reads: com.hipsterwhale.crossy.plist.

7.  No need to refresh, just close the window, open the app, and enjoy your new riches!

With these important tips and hacks, you should be well on your way to Crossy Road success. If you’re bad at first, don’t worry, you’ll make quick progress. And just think, they say it only takes 10,000 hours of practice to really master something, so hop to it!

Hipster Whale: The biggest Easter egg in the game is the locked character at the end of the list of playable characters. Spoiler alert, it’s the hipster whale, named after the app’s creator. You see him when you load the game, complete with a hipster-ish cap, facial hair, glasses, and the obligatory cup of coffee in one hand and camera in the other. The only way to get this character is by playing the game, where he will occasionally appear in the streams. When he does, you’ll have to act quickly and jump on his back. If you do manage to catch him, don’t advance further, stay on his back and ride him until your game ends in the rapids. You will then unlock the character and be able to play as him in the future.

Or, if you’re impatient like me, you can use the hack mentioned above to unlock the whale. This may not be the most ethical way to capture a hipster whale, but I have to admit, playing as this character is pretty fun. Like all the other characters in the game, he doesn’t do anything to make game play substantially different, but he does make an extremely satisfying splashing sound when he hops and will snap photos on his sweet hipster camera from time to time.

Other Easter eggs: The other easter eggs in the game are also characters you can play as, but are obtainable by the normal slot machine or in app purchase methods. Some of these characters include “Doge,” of doge meme fame, and “Pew Die Pug,” a reference to the dog owned by Felix Kjellberg, aka “PewDiePie,” a Swedish video game commentator on YouTube.