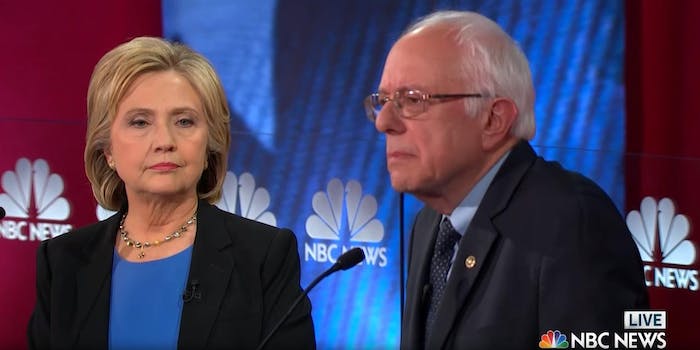 How to watch the last-minute Democratic debate in New Hampshire

Fresh off the heels of a near-tie in Iowa, Democratic presidential candidates Hillary Clinton and Bernie Sanders are scheduled to debate in New Hampshire on Thursday night. It will be the first of an additional four debates that both candidates reached a final agreement on Wednesday, the Washington Post reported.

After holding of on formally agreeing to the New Hampshire debate due to pending negotiations with the Clinton campaign on the time and place of future debates, Sanders told CNN’s Wolf Blitzer on Wednesday afternoon that Clinton’s campaign had agreed to three more debates in exchange for Sander’s attendance at tomorrow’s event.

The stakes for Thursday’s debate are pretty high. The New Hampshire debate will be the first opportunity for the public to see the candidates face off one-on-one—former Maryland Gov. Martin O’Malley dropped out after a poor showing in Iowa—and their clash would come just five days before the Granite State holds its primaries on Feb. 9.

The DNC on Sunday said it would sanction Thursday’s debate and add future debates to the schedule, but was waiting on agreement from both Sanders and Clinton. The DNC has been criticized by both voters and candidates for neglecting to give the party’s potential standard-bearers more screen time. A DNC spokesman told the Washington Post on Wednesday that all four debates have now been sanctioned.

The campaigns have agreed to avoid weekends and holidays for future debates and are also weighing a debate in Flint, Michigan, to highlight the ongoing water crisis there.

The Vermont independent senator told Blitzer that Clinton had agreed to debates in Michigan, California, and Pennsylvania. The Clinton campaign did not meet Sander’s request for a debate in New York, Sander’s birthplace as well as the state that Clinton represented as a U.S. senator.

So if all this goes as planned, when and where is Thursday’s debate?

The MSNBC debate begins at 9 p.m. ET at the University of New Hampshire in Durham, New Hampshire. Chuck Todd and Rachel Maddow will moderate. While all three Democratic presidential candidates were scheduled to attend, O’Malley is unlikely to be there.

How can I watch and follow along with the debate?

MSNBC also has an iOS app, while NBC has both iOS and Android apps.

The hashtag on Twitter will, of course, be #DemDebate.

What should I expect?

Sander’s performance in Iowa did what months of climbing poll numbers and packed rallies couldn’t: it transformed him from a dark-horse candidate into a serious contender for the Democratic nomination.

In other words, expect the claws to come out from both candidates. Clinton will likely press Sanders on the particulars of his proposed social programs and tax plans.

Unlike Clinton, Sanders supports a federal minimum wage and is not a fan of Dodd-Frank regulations on big banks, which he views as toothless. Sanders has accused Clinton of being too cozy with Wall Street in the past, and he proposed legislation last spring that would break up the “too-big-to-fail” banks supported by the Wall Street bailout.

Clinton, meanwhile, has suggested that Sanders wants to dismantle the Affordable Care Act and replace it with his single-payer healthcare plan, a statement that the Sander campaign said was “absolutely outrageous and incorrect.”

What are Sander’s prospects in New Hampshire?

If Sander’s prospects in New Hampshire looked sunny before the Iowa caucuses, his prospects in the aftermath of his virtual tie with Clinton are even better now.

The presence of more liberal Democrats than moderates in New Hampshire, plus the state’s proximity to Vermont, both work in Sanders’s favor. FiveThirtyEight gives Sanders a 97-percent chance of winning New Hampshire. A University of Massachusetts–7 News tracking poll released on Wednesday gives Clinton and Sanders a more conservative 61–32 split.