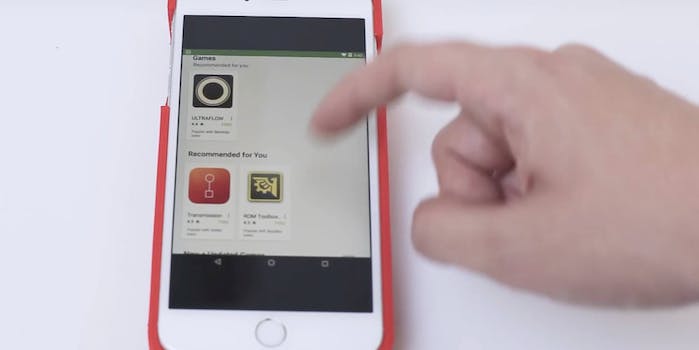 Talented engineers made Android work on an iPhone screen, and the world will never be the same

In case you can't pick a side.

Android phones come in all shapes and sizes. Thanks to the talented team of engineers at Tendigi, Google’s mobile operating system can count the iPhone among the devices it can run on.

That’s right, the ultimate war in mobile might finally be over, or at least experience a temporary ceasefire as Apple and Android fanboys alike can set down their keyboards to bask in the unlikely sight of Android running on an iPhone.

It’s closer to turning the iPhone into an interactive monitor to display the Android operating system running on a separate machine, but it’s still a surprising image to see, and the achievement was no simple feat, as Tendigi chief technology officer Nick Lee explained in a blog post.

The project made use of a Lemaker HiKey, a single-board computer with a powerful 8-core, 64-bit ARM Cortex-A53 processor and the official reference board suggested by Google as part of its Android Open Source Project (AOSP).

The HiKey was the main component of what was essentially a smartphone with no display; it sat, along with its own standalone battery, in a custom-made enclosure that Lee 3D printed using design tool  SketchUp, an iPhone 6 Plus case model from Thingverse, and a XYZprinting da Vinci 2.0 Duo 3D printer. The bulky, brick-like case offered room for openings for an SD card, HDMI, and USB ports. Inside the case was everything Lee needed to run Android; all it took to get it on the iPhone was to plug in a Lightning cable. The rest happens on screen, as Lee used a custom-made Tendigi to display and interact with Android on the iPhone. Lee and Tendigi haven’t actually booted up Android on an iOS device, as truthers and people who hate the enjoyment of others are sure to point out at every opportunity; rather what’s taking place in the project is closer to mirroring one device on another. But thanks to the iPhone’s touch display, it provides a pretty similar effect, allowing direct interaction with Android in essentially the same way one would use the operating system on any other device.

So yes, Android is running in the case and just being displayed on the iPhone. You can either appreciate that for what it is, or you can be a giant buzzkill. The choice is yours, fanboys.