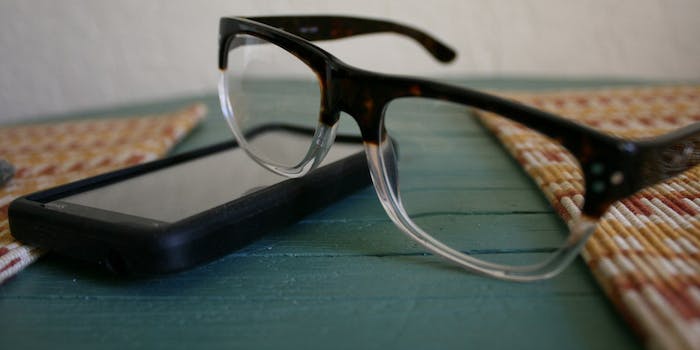 How to fight smartphone addiction on Thanksgiving

Stop tapping at screens and embrace the IRL.

Technology is great. I don’t care who you are or where you’re from, texting and Facetiming and Candy Crushing—or whatever versions of these things you prefer—are all great. So that’s why when societal norms dictate a few days a year wherein we should limit our screen time, we should probably listen. And we’re fast approaching one of them: Thanksgiving.

Easier said than done, though. The good news is, new research says that most of us know we ought to disconnect from virtual world. According to Eventbrite, 66 percent of Americans are smart enough to think that phones should be banned from major holidays like Thanksgiving and Christmas, but 30 percent (most of them men) can’t help themselves and check their notifications anyway.

If you’re expecting guests that fall within the gadget-dependent category (or you yourself fall in it), there are a few things you can attempt in order to keep the eyes up and not glued to a screen (unless it’s a TV screen while watching football or a parade because this is America).

Set up vacation auto-response on your work email.

Make it known that you have absolutely no intention of doing anything job-related during the holidays. In Gmail, this is under “vacation responder.” Turn it on.

If you foresee the need to keep your laptop on during the festivities, make sure to mute Desktop Notifications as well to avoid work distractions.

Take advantage of the “Do Not Disturb.”

Every iOS device has a nifty little option under Settings that comes with a crescent moon icon—that puts you out of touch completely, though you can personalize what gets through and what doesn’t.

Enabling the feature manually will stop incoming calls and notifications from waking up your gadget’s screen. You can also schedule Do Not Disturb by putting in a start and end time for “Quiet Hours” and tweak the settings even further by choosing whose calls you wouldn’t mind receiving (because you know they would only call you for emergencies) and letting repeated calls from one person through.

If you foresee using your gadget for something else—like reading e-books or playing music—you can set the silence option at the bottom to “Always.” That way, even though the gadget is in use, alerts will not be displayed (but will be collected in the notifications hub for later review) and will not interrupt whatever you’re doing.

While some Android phones don’t have this iOS feature integrated, there is an app of the same name available that provides similar solutions.

Install other unplugging apps for the extra push.

Temporarily silencing your device’s torrent of notifications for a day might seem pointless, but not hearing the constant vibrates and pings might actually give your weary brain a rest (and you know, help you reconnect with the other living humans around you).

Unplugging apps aren’t meant to wean you off obsessive social networking, incessant text messaging, and the Internet completely—they were created to help you find balance in your life so you have time for more things that don’t involve typing and swiping.

Offtime for Android allows you to block calls, texts, and notifications, but lets calls and texts from people you put on the VIP list through. It can send custom auto-replies and restrict app and Internet access when your will is wavering. It also logs all the activity you missed while you were offline and produces phone and app usage analytics that can help you reflect on your digital dependencies.

Moment allows you to restrict your iOS use through self-imposed daily limits. The app can detect how many times you pick up and use your iPhone and iPad and keep every moment of distraction logged for later review. You can also set it up to track where you go on a daily basis and plot your movements on a map.

If you need further evidence of your uncontrollable tendencies to grab your phone, the Checky App will tell you how often you—as its name implies—check your phone. Hopefully the results discourage you from your addiction encourage better phone behavior and IRL social interaction.

Of course, if you really want to completely go on digital detox, you can always temporarily uninstall the apps you use the most.

While it’s convenient to play popular and beloved games on your devices, there’s no reason why you shouldn’t enjoy playing Jenga the old-fashioned way. Like, with your hands. Break out the Scrabble board or get ready to hate your life while playing Monopoly. Put down the Dots (as much as we all love Dots) and pick up the Miniature Top hat.

The same advice goes for other apps you rely on: Pull out a real-life, honest-to-goodness camera instead of Instagram (bonus points for a film model). A recipe book instead of your Epicurious app. Argue about politics with your relatives instead of your Twitter followers.

This move is for the truly, truly desperate. If you want to keep visitors from staring at their screens, go ahead and change your Wi-Fi password. Whoever can’t pry themselves away will switch to data, but if they aren’t willing to lose their precious megabytes, then they’ll have to decide if it’s worth it to ask you for the password. It’s at least a tiny barrier to help you get some human contact.

Donate to a good cause.

Celebrate Thanksgiving by turning your phone dependency into something the less fortunate can actually be thankful for. There are a handful of apps that turn your addiction into donations for others, Unicef’s Tap Project app being one of them. There’s also iCukoo, which is actually an alarm clock app but could absolutely be used for these purposes.

Use rewards and punishments, if you must.

You really can’t force people to surrender their personal belongings upon entering your home, just like you can’t tell everyone “Hey, only one Instagram post, OK?” and expect to be taken seriously. The next best thing would be to initiate friendly competition and sweeten the deal with hard-to-resist rewards and paranoia-inducing consequences.

Don’t be a Luddite-like tyrant.

The key to getting people to unplug and connect IRL is to know where the line of disconnection is. Not all screen-based technology is going to keep you from sharing moments with your family and friends; a Netflix marathon, for instance, is welcome! Taking Instagram selfies with your cousins or grandparents? Wonderful! It’s the eyes-down, mouth-shut, totally inward attitude you want to combat, not any and every tech-made activity. You don’t have to sit in a log cabin without electricity to reconnect.