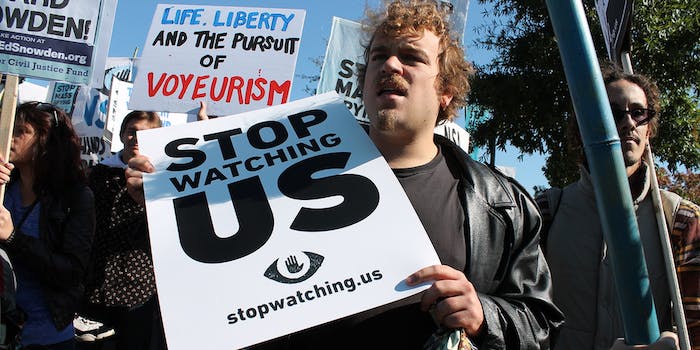 One step forward, three steps back.

The USA Freedom Act, once championed as the best way to limit mass government surveillance, passed the U.S. House of Representatives Thursday in a 303-121 vote. But privacy advocates inside and outside of Congress aren’t happy.

BREAKING: USA FREEDOM Act passes the House. It’s a weak attempt at NSA reform. We’re working for a stronger version in the Senate.

Earlier this week, the Obama administration reportedly led last-minute backroom negotiations with House leaders to include new language in the bill that many believe negates efforts to meaningfully reign in National Security Agency spying activities. As a result, public supporters of the bill, including civil liberties advocates and major Internet companies, have since come out against the legislation, calling it  “watered down” and “gutted.”

Formally known as H.R. 3361, the Freedom Act initially gathered broad bipartisan support, with more than 140 cosponsors from both sides of the aisle. Ahead of Thursday’s House vote, however, that number began to fall.

Rep. Justin Amash (R-Mich.), an original cosponsor of the Freedom Act, announced on Facebook that he would vote ‘no’ on the current draft of the bill.

I am an original cosponsor of the Freedom Act, and I was involved in its drafting. At its best, the Freedom Act would have reined in the government’s unconstitutional domestic spying programs, ended the indiscriminate collection of Americans’ private records, and made the secret FISA court function more like a real court—with real arguments and real adversaries.

I was and am proud of the work our group, led by Rep. Jim Sensenbrenner, did to promote this legislation, as originally drafted.

However, the revised bill that makes its way to the House floor this morning doesn’t look much like the Freedom Act.

As an original co-sponsor of #USAFreedomAct I was sad to see the bill weakened before the vote. #NSA https://t.co/fpZsA6QpLM

As did a number of the bill’s other former supporters in Congress:

The watered-down #USAFreedomAct that passed the House doesn’t do enough to rein in the NSA & fails to adequately protect privacy. I voted NO

I originally supported #USAFreedomAct, but it was weakened – doesn’t rein in #NSA & protect privacy. I just voted NO @CenDemTech @EFF

I voted ‘no’ on the #USAFreedomAct. Read my statement here: https://t.co/YyAKPVwTvx

The gutted #USAFreedomAct, a bill I originally supported, just passed the House. I voted against #HR3361, here’s why: https://t.co/fAatbnChA0

Today’s strong, bipartisan vote by the House of Representatives on the USA Freedom Act will help protect our cherished individual liberties as the federal government carries out its duty to keep our nation safe from foreign enemies. The USA Freedom Act safeguards Americans’ civil liberties by ending domestic bulk collection once and for all and increases the oversight and transparency of these intelligence-gathering programs so that we can begin to rebuild trust with the American people.

The primary objection to the House-approved draft of the bill stems from the new definition of “specific selection term,” which dictates what data the NSA is allowed to surveill. An earlier version, which privacy advocates supported, limited these terms to “a person, entity, or account.” The latest draft adds the terms “address” and “device,” and prefaces them with the non-limiting phrase “such as,” which critics say leaves the bill open to dangerously broad interpretation.

Another major criticism of the legislation includes a lack of significant reform to Section 702 of the Foreign Intelligence Surveillance Amendments (FISA) Act, which dictates when the NSA may collect data on Americans in particular circumstances, and how they must handle data incorrectly collected from U.S. citizens.

The Freedom Act will now move on to the Senate, which is expected to consider the legislation later this year.