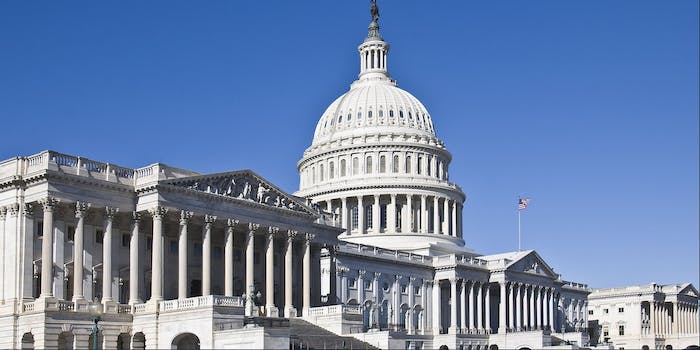 A Twitter guide to the House lawsuit against Obama

It's easy to fit political grandstanding in 140 characters.

The U.S. House of Representatives made history Wednesday by voting to sue the president of the United States—the first time that’s every happened. The lawsuit, which stems from President Barack Obama’s use of his executive authority to delay key provisions of the Affordable Care Act (a.k.a. Obamacare), passed the House by a vote of 225-201. Five Republicans joined all 196 House Democrats in voting against the measure.

Legal experts doubt that the House will win its lawsuit. The first issue is “standing,” or the question of whether the House has the right to sue at all. To demonstrate standing, the House will have to prove that it has been specifically and uniquely injured by the president’s unilateral delays of Obamacare provisions. Because there is little reason to think that the delays injured the House or its members more so than other Americans, standing will be difficult to prove.

The second issue concerns whether the delays of certain Obamacare provisions were within the purview of executive branch authority. Past presidents, including Bill Clinton and George W. Bush, routinely postponed regulations. Constitutional Accountability Center lawyer Simon Lazarus told the L.A. Times that President Obama’s actions were “not a refusal to enforce the law, but a phase-in, and that’s different.”

Putting aside the legal questions, what were the arguments for and against the lawsuit as the resolution worked its way to passage? We scoured Twitter for comments by members of Congress, and here are the pros and cons that they expressed.

We didn’t want to do it, but we had to. We closed our eyes and held our noses while we mournfully cast our “Yea’ votes, we promise.

I wish it hadn’t come to this, but the House just passed a resolution authorizing a lawsuit against President Obama. The vote was 225-201.

The president wasn’t faithfully executing the laws of the country. And after he took an oath and everything! Did he have his toes crossed while he was being sworn in?

I voted for & the House passed H.Res. 676: to provide authority to sue the President for failure to faithfully execute the laws of the U.S..

If we average Joes have to follow the law, shouldn’t the president?

Average Americans must follow the law, so why doesn’t the President of the United States? http://t.co/J5vnjDD9eT

The United States Constitution, once quaking in its impenetrable case in the basement of the National Archives, can breathe easier now…

Just voted to defend the #Constitution and authorize @SpeakerBoehner to sue the President.

…because the president won’t be able to “rewrite” laws by himself.

President Obama is bound by the Constitution to faithfully execute all laws fairly – not rewrite them unilaterally. – http://t.co/0wInrsRkY0

Obama, who taught classes on constitutional law at University of Chicago Law School, needs a “reminder” of how the Constitution works.

And hey, the other side did this to their nemesis too.

Sittin on Floor listening to debate if Cong has right to sue the Pres. D’s say no, but they sued Geo W Bush. Can you say “D”ouble standard?

For the record, Rep. Weber’s (R-Texas) statement is inaccurate. In June 2002, a small group of Democrats sued President George W. Bush for his decision to withdraw from the 1972 Anti-Ballistic Missile Treaty. However, that suit was filed by individual members. This week’s lawsuit against Obama was endorsed by a floor vote of the full House of Representatives, making it a lawsuit on behalf of the House as an institution, which is historically unprecedented.

Additionally, the institutional element is key to the debate over standing that Weber references. The judiciary evaluates legal clashes between the other two branches based on the “political question” doctrine; as explained above, they generally stay out of disputes that they consider to be about purely “political questions.”

And the last argument in favor of the lawsuit, albeit one that no Republican lawmaker will make on the House floor: It’ll make for great television.

I will be on Fox News at 6:00 pm CST to talk about the passage of the legislation to initiate a lawsuit against President Obama.

Of course, Democrats aren’t letting their GOP counterparts fire off without landing some jabs of their own. Here are their arguments against the lawsuit, in a nut shell.

The lawsuit is a “stunt.” If House Republicans want to get attention for a daring feat, why not set up a tightrope from one side of the chamber’s second-floor viewing gallery to the other?

#GOPlawsuit against the President is a political stunt, a display of failed leadership that wastes the American people’s time & tax dollars.

It’s not a “real issue,” according to Rep. Yvette Clarke (D-NY), who appears to be under the impression that Congress remains in the business of dealing with real issues.

House Votes to Sue Obama for Overstepping Powers http://t.co/4EQp6eUrGM I am deeply disappointed. We need to focus on the real issues.

It’s a waste of money. Unlike, say, ethanol subsidies, which Hoyer (who has a 100 percent rating from the American Coalition for Ethanol) voted to extend as part of the Tax Relief, Unemployment Insurance Reauthorization, and Job Creation Act of 2010.

It takes time away from doing other, more productive things. And when there are so many post offices that need renaming!

#GOP could #jumpstart the middle class & economy, but chose to waste taxpayer $ on #GOPLawsuit against the President http://t.co/duYuJyJ9K2

The president is just doing his job. To which some will say, Did he even get his job fair and square? Come to think of it, how do we know he’s even eligible to do this job?

Try changing the law instead of suing over it. Rep. Schiff, do you really want to invite the GOP to change Obamacare? When they insert death panels, we’re blaming you.

If Congress doesn’t like the way a President implemented a law, they can change the law. #GOPLawsuit has no standing! http://t.co/oZGE5fvaez

The legal provision that the president is supposedly flouting is one that Republicans don’t want to see enforced anyway. Because reasons.

To be clear, the House Republicans are suing the President for waiving small biz requirements in #ACA, something they desperately want done.

Can’t we all just get along? The day Congress comes together is the day pigs fly, get elected to the House, and get appointed to the House Transportation Subcommittee on Aviation.

Instead of wasting taxpayer’s $ suing the President, Congress should come together to put the #middleclassfirst. https://t.co/SCrVlyYeaQ

In case you were wondering, none of the five Republicans who voted against the resolution to sue the president have uttered so much as a peep about their votes on Twitter.

Correction: President Obama received a J.D. from Harvard Law School. He later taught constitutional law at the University of Chicago.