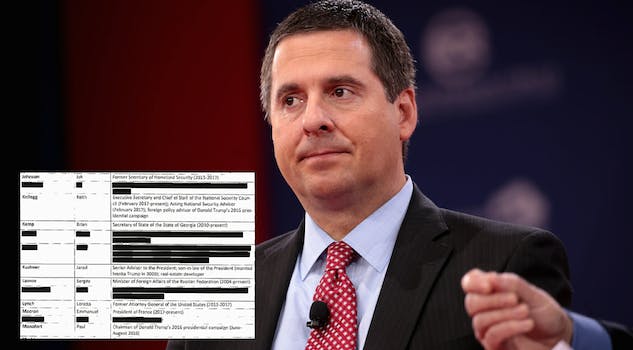 What to make of the erratic redaction in the House Intelligence Committee’s Russia report?

It's all over the place.

On Friday, April 27, the House Intelligence Committee formally marked the end of its investigation into Russian meddling in the 2016 election by releasing a final report on its findings.

As with every element of every investigation into Russia and the 2016 election, the reaction to the report has fallen almost entirely along party lines. President Donald Trump cited it as proof the investigation as “a Total Witch Hunt,”while Democrats blasted it as “misleading and unsupported by the facts.”

While the partisan rancor surrounding the investigation will be picked apart by pundits on both sides, one aspect that’s baffled virtually everyone is the amount of redaction in the report.

It’s not unusual for an intelligence report to redact sources or methods that need to be kept secret, but the redactions in this particular report has struck experts as somewhat over the top. Huge chunks are blacked out, including full paragraphs, footnotes, and even entire pages. The report contains a list of referenced persons where many entire people are redacted entirely.

The reason for the heavy redaction was given as the intelligence community trying to protect active investigations, but as Republican Committee Chair Mike Conaway pointed out, “many of the redactions include information that is publicly available, such as witness names and information previously declassified.”

Names and dates are redacted when it’s obvious to anyone familiar with the Russia saga who is being discussed—and redaction of some names seems to change page by page.

One particularly odd redaction is of “Trump’s former head of security (REDACTED).” This is obviously Keith Schiller, the Trump confidante and bodyguard who left the White House in 2017.

At other points, the report leaves names unredacted, only to redact them later, sometimes on the very next page.

So why are certain names redacted throughout the report, even at points when it’s plainly obvious who’s being discussed?

Among the names that appear to be redacted are a number of high-profile Russians and people directly connected to Donald Trump, his businesses, and/or his campaign.

Russian billionaire Aras Agalarov and his son Emin, who helped arrange the Miss Universe pageant held in Moscow in 2013, appear to be redacted in the list of “referenced persons” but are mentioned numerous times in the report itself.

Another prominent Russian connected to Trump who appears to have his name initially redacted is Felix Sater, a real estate billionaire who had an advisory role in the Trump Organization. But again, Sater’s name (and his company’s name) can be found in the report itself, as emails and texts between Sater and Trump fixer Michael Cohen are cited in numerous footnotes in a way that makes it obvious where Sater’s name is redacted.

All of the Russian attendees of the infamous “Trump Tower meeting” in June 2016 also appear to be redacted, though, like the others, their names pop up in the report’s section on the meeting; an entire graphic on page 80 is devoted to just the meeting.

It’s unclear why these Russians were redacted from the House report, and why that redaction appears to be incomplete.

One possible reason is that the redacted names might be linked to other concurrent Russian investigations. The Agalarovs are under scrutiny by Special Counsel Robert Mueller for their real estate deals with Trump, while Sater appeared before the Senate Intelligence Committee on April 4, just weeks before this report was released.

There are also a number of Americans that appear to have been redacted by the intelligence community beyond Schiller.

Former Trump campaign manager Corey Lewandowski might be the most high profile, as on page 69, his name is blacked out while his title is left uncensored. His name is also blacked out in reference to House Intelligence Committee testimony he gave on Jan. 17—but the date wasn’t redacted, making it obvious who is being talked about.

Carter Page, a Trump advisor heavily linked to Russia, also appears to be both redacted and unredacted, and Trump campaign digital director Brad Parscale is referenced by title on page 74—with his name redacted, and his title not.

Hillary Clinton campaign manager Robby Mook, who is referenced by title on page 89, also has his name blacked out.

Page, Parscale, and Lewandowski are all major figures in other Russian investigations, including those by the Senate and FBI. But Robby Mook is unconnected to any investigation, while none of the figures actually indicted by Robert Mueller, including Paul Manafort and Michael Flynn, appear to be redacted in any way, nor were other figures who have testified before the House.

While the report itself will probably be consumed in partisan rancor, the redactions might provide a fascinating glimpse into who the next targets of the Special Counsel or FBI could be. Or maybe they’re just the result of FBI agents who like using black highlighters.