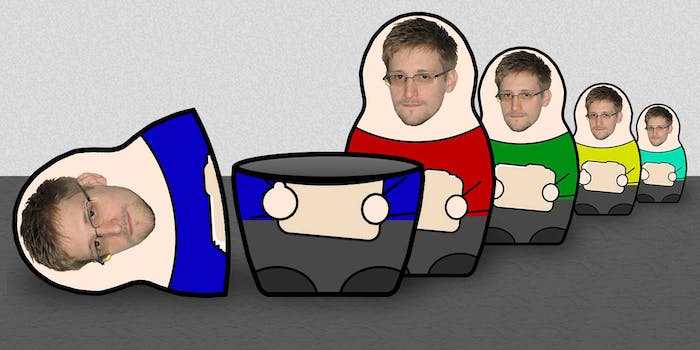 It also made a nod to the fact that Russia can get pretty cold in winter.

For some reason, the minority office of the House Foreign Affairs Committee got all snarky on whistleblower Edward Snowden Thursday.

“Edward Snowden, enjoy the #Russian winter and the borscht!” the Democrats’ account tweeted Thursday evening. This is a thing that happened, despite the account—which has been verified by Twitter—representing a significant component of the United States legislature.

Edward Snowden, enjoy the #Russian winter and the borscht!

That’s not normal for @HFACDemocrats. A quick look at its top tweets on Favstar and Topsy indicate it’s almost always serious, and mostly just tweets its stances on foreign policy and links to livestreaming hearings.

“Interns really do take over DC in the summer,” tweeted @jodavirgan.

This particular tweet wasn’t sent by a rogue intern, however. “This was a fully authorized tweet,” a representative told the Daily Dot Friday morning.

Snowden, who leaked a trove of documents proving the existence of a host of National Security Agency programs, received a year-long grant of asylum from Russia Thursday morning. Plenty in the U.S. government have expressed their extreme displeasure with Russia for the action, which came two days after fellow Wikileaks-associated whistleblower Bradley Manning was found guilty of espionage, facing 136 years in prison.

White House press secretary Jay Carney expressed his displeasure with Russia in a press conference, saying he was “extremely disappointed” with the country for its decision. The minority office of the House Foreign Affairs Committee, on the other hand, hashtagged the word “Russian” and made a light Russia-is-cold-and-they-eat-borscht-there joke.