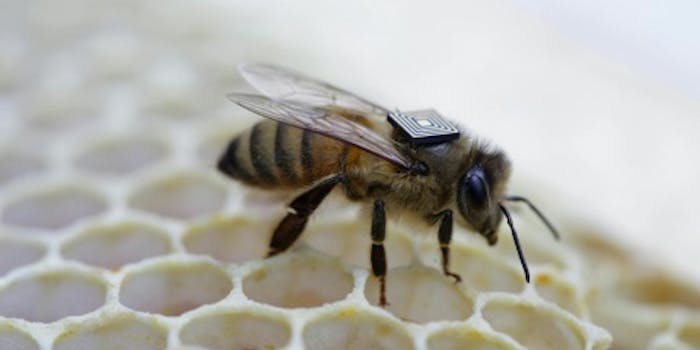 This research is being carried out by scientists at Australia's CSIRO science agency in partnership with Intel and Hitachi.

Tiny electronic backpacks might save the world’s collapsing bee population.

The newest diagnostic tool in the case of the disappearing honeybees is a miniature sensor that weighs less than the pollen the bees collect, worn by individual bees on their bodies. The sensors are 2.5 millimeters square and weigh in at just 5.4 milligrams (0.0002 ounces), providing researchers valuable data about bee behavior in order to more fully understand what’s killing the creatures that pollinate some 70 percent of the world’s crops in a phenomenon known as “colony collapse disorder.”

This marks the first time such research will be able to quantify bee behavior both inside and outside of the the hive.

The research is being undertaken by Australian scientists at the country’s Commonwealth Scientific and Industrial Research Organization science agency, in cooperation with researchers from Intel and Hitachi. So far they have tagged some 10,000 bees with sensor packs in Tasmania. They plan to do the same for bee populations in Sydney and Canberra.

“[The sensor technology] tells us about their changes in behavior—how often and how long they’re foraging, whether they’re feeding, whether they’re collecting pollen, what they’re doing in the hives. We can then see if we can interpret those changes to tell us how they are responding to different stresses,” CSIRO Science Director Gary Fitt told Agence France-Presse.

If the research yields the valuable data researchers anticipate it will, the salvation of the bees might have been sitting at the intersection of technology and bee fashion all along.

If we can figure out what is affecting bee populations, maybe we won’t need their flying robotic replacements after all.