'It was our moment to make our point by subverting the message using the show itself.'

Creators of the Showtime series Homeland got more than they bargained for when they hired three “Arabian street artists” to add authenticity to the show’s Syrian refugee camp set.

The three artists—Heba Amin, Caram Kapp and Stone—say they were hired to decorate the set with spray paint, writing messages along walls that were “apolitical” but original, to avoid copyright infringement. “Mohamed is the greatest, is okay of course,” the trio said they were told.

“It was our moment to make our point by subverting the message using the show itself.”

Continuing her role in Homeland’s fifth season as former Central Intelligence Agency operative Carrie Mathison, actress Claire Danes can be seen in this week’s episode strolling past the Arabic graffiti on the show’s Berlin set. Unbeknownst to Danes or Homeland’s production staff, however, the Arabic script did not convey the Islamocentric messages they’d hoped for.

In one scene, Danes and British actor Max Beesley pass by some Arabic graffiti that translates to “Homeland is racist.” Other messages on the set read: “Homeland is a joke, and it didn’t make us laugh,” “There is no Homeland,” and “#BlackLivesMatter.”

“The set decoration had to be completed in two days, for filming on the third,” the artists explain. “Set designers were too frantic to pay any attention to us; they were busy constructing a hyper-realistic set that addressed everything from the plastic laundry pins to the frayed edges of outdoor plastic curtains. It looked very Middle Eastern and the summer sun and heat helped heighten that illusion. The content of what was written on the walls, however, was of no concern. In their eyes, Arabic script is merely a supplementary visual that completes the horror-fantasy of the Middle East, a poster image dehumanizing an entire region to human-less figures in black burkas and moreover, this season, to refugees.”

The trio says they were initially skeptical when contacted by a friend who was asked by Homeland’s set production company to find “Arabian street artists.” But they soon realized they had an opportunity to make a political statement about the show, which they say perpetuates a dangerous stereotype. 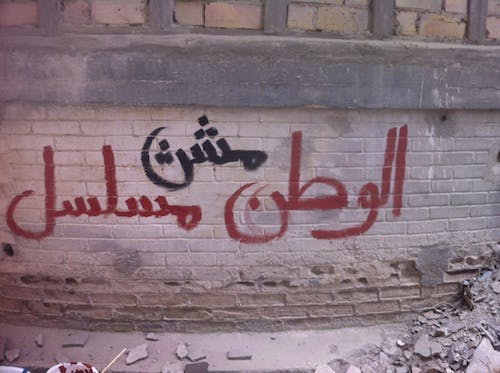 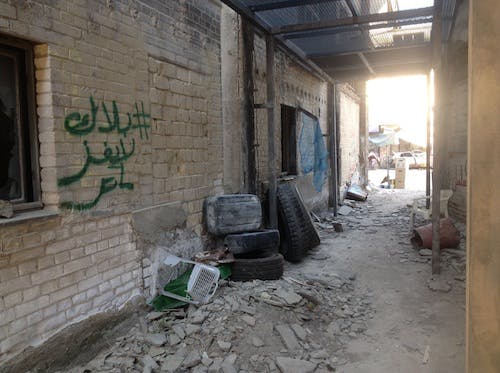 “Given the series’ reputation we were not easily convinced,” the artists said, “until we considered what a moment of intervention could relay about our own and many others’ political discontent with the series. It was our moment to make our point by subverting the message using the show itself.”

“As Homeland always strives to be subversive in its own right and a stimulus for conversation, we can’t help but admire this act of artistic sabotage.”

The graffiti artists are not the first to draw attention to the show by criticizing its portrayal of Muslims. In a scathing 2014 Washington Post review, filmmaker Laura Durkay described Homeland as “the most bigoted show on television.”

“The entire structure of Homeland is built on mashing together every manifestation of political Islam, Arabs, Muslims and the whole Middle East into a Frankenstein-monster global terrorist threat that simply doesn’t exist,” wrote Durkay, adding: “In just a few steps, the show has neatly stitched together all the current bogeymen of U.S. foreign policy.”

Durkay further argued that Homeland represents more than just “mindless entertainment” in the form of a television show, as the stereotypes it seemingly perpetuates “are used politically to justify actions in the real world—U.S. wars, covert operations and drone strikes; CIA detention and torture; racist policing, domestic surveillance, and militarized borders.”

Showtime has yet to comment on the act of political sabotage, but after the artists revealed what they’d done, Homeland creator and executive producer Alex Gansa told Deadline: “We wish we’d caught these images before they made it to air.”

“However,” Gansa added, “as Homeland always strives to be subversive in its own right and a stimulus for conversation, we can’t help but admire this act of artistic sabotage.”