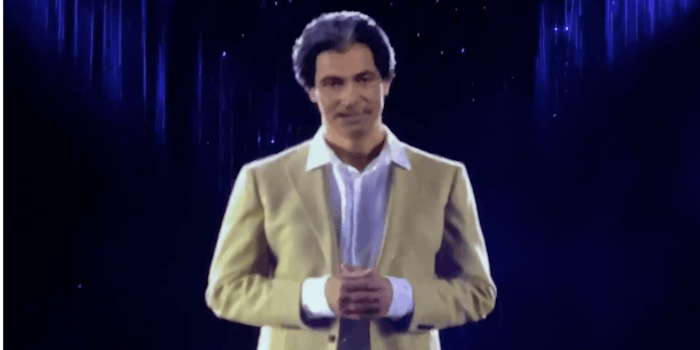 The case probably doesn't have much merit.

On Thursday, Kim revealed online that Kanye had procured a hologram of her deceased dad, Robert Kardashian, as a gift for her 40th birthday.

The hologram makes it appear as if Robert, a prominent lawyer who died in 2003 shortly after being diagnosed with esophageal cancer, is congratulating Kim for her accomplishments and her plans to become an attorney.

“For my birthday, Kanye got me the most thoughtful gift of a lifetime. A special surprise from heaven,” Kim said. “A hologram of my dad. It is so lifelike! We watched it over and over, filled with emotion.”

But not everyone is convinced that the creation is lifelike. HUSA and its billionaire founder Alki David say the hologram, which they say they did not create, infringes on their business.

Ever since then, Alki has entered into a string of lawsuits against other companies that have attempted to use the technology to create holograms as well.

In a statement to the Daily Dot, a spokesperson for HUSA argued that the “inferior quality” of the Kardashian hologram has harmed their business.

“Not only does it infringe on patents owned by HUSA—the same ones that created the famous Tupac Shakur hologram at Coachella—it was also such inferior quality that it stigmatizes the entire hologram industry HUSA created,” the spokesperson said. “And since the public assumes it was made by HUSA, it directly hurts our business interests.”

HUSA added that Kim would be named in the lawsuit also “for blatantly exploiting the patents on her social media.”

“Perhaps she will defend herself in court, if her Cliff Notes law degree certificate comes in the mail in time,” the spokesperson said.

HUSA did not say which company it believed helped create the hologram for Kanye or if it intended to file a lawsuit against them as well.

HUSA also went out of its way to tell the Daily Dot that it has created a hologram of President Donald Trump’s late father Fred Trump and is offering it to congratulate the president “at his victory speech on Nov. 3rd.”