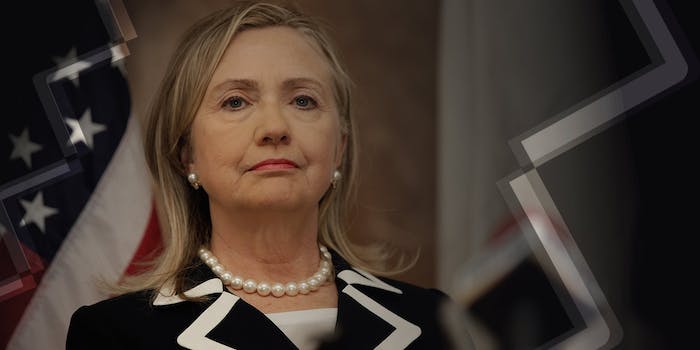 You have to read her response to being Photoshopped out of the now-famous Situation Room pic.

Hillary Clinton’s campaign dumped the latest cache of emails from her State Department days on an otherwise-quiet New Year’s Eve.

Eight thousand new emails were supposed to be made publicly available on Thursday, but the department actually released only 5,500—with promises to publish the rest at some point next week.

Still, that’s no light reading list. As we sort through the digital troves, a few gems have already risen to the surface.

According to CNN, Clinton’s campaign staffers became aware of the Texts From Hillary Tumblr in April 2012. After the meme had gone viral, based on a photo of Clinton casually wearing sunglasses while looking at her phone, State Department staffer Russell Potter emailed Clinton to tip her off: “Not sure if you’re aware of this and its recent ‘life’ on Facebook. Seems everyone is posting it.”

Clinton’s chief of staff Cheryl Mills sent over a note in response to the meme simply saying, “You look cute.”

But Clinton seemed vaguely perplexed by the meme, asking “Why now? That was on way to Libya,” in a response to Potter’s email.

The latest emails reveal that when Brooklyn’s Hasidic newspaper Der Tzitung Photoshopped Hillary out of a now-famous Situation Room picture, she was the first to know. Both Clinton and White House staffer Audrey Tomason were Photoshopped out of the photo due to the newspaper’s strict ban on running photographs of women (considered immodest by religious restrictions).

Clinton read about the removal in the blog Failed Messiah and sent an annoyed email to her aides, announcing she’d been ghosted from the pic “perhaps because no woman should be in such a place of power or that I am dressed immodestly!!”

Then she revealed her sarcastic side, signing off the email with a dry “Happy Mother’s Day.”

In a series of emails, the Center for American Progress’s Executive Vice President for External Affairs Winnie Stachelberg gently nudged Clinton toward a more inclusive stance on LGBT rights.

The Washington Blade reported Thursday night that Stachelberg emailed Clinton a link to a tweet announcing Obama’s groundbreaking interview with Robin Roberts in which he announced his support for marriage equality.

In an earlier email, Stachelberg sent over a statement on Obama’s endorsement of the Respect for Marriage Act, a law that was designed to dismantle DOMA (the Defense of Marriage Act).

In another series of emails, Clinton’s deputy assistant secretary of state for democracy, human rights, and labor Daniel Baer notified her of international LGBT human rights wins and of an urgent need for response to Nigeria’s anti-gay law that was passed in January 2014. Baer’s proposal to halt the Nigerian legislation before it could pass was redacted from the email before the State Department released it on Thursday, according to the Blade.

A quick search for “prostitution” in the online FOIA trove brought up a 2012 draft speech emailed to Anthony Fauci, head of the National Institute of Allergy and Infectious Diseases (NIAID). The speech is entirely redacted, but it may be an early draft of the World AIDS Day speech Clinton gave that November.

In the email chain, speechwriting director Josh Daniel offers to “send mail on the sex worker/people in prostitution issue to a smaller group.” That separate email does not appear to be included in the current stack, based on initial searches.

5) Turning away from Obama

A few of the newly released emails show a rippling tide of supporters turning away from Obama and toward Clinton. The one that’s received the most news coverage since the Thursday dump reveals that billionaire political donor George Soros “regretted his decision in the primary” to back Obama instead.

The email, also from a Center for American Progress head (Neera Tanden), informed Hillary that Soros praised the way “he can always call/meet with you on an issue of policy and said he hasn’t met with the President ever.”

In 2009, former White House official and Clinton adviser Sidney Blumenthal wrote to let Hillary know that German chancellor Angela Merkel was so over Obama. In Obama’s first year of presidency, Merkel allegedly said the “Obama phenomenon” was “contrary to her whole idea of politics and how to conduct oneself in general.” Blumenthal notified Clinton that the German leader was interested in “a more conversational relationship” with her, reported the Guardian.

The Daily Dot discovered a particularly interesting reflection on Clinton’s part about the efficacy of social media activism. In a March 2012 email chain, Clinton responded to the Israel Loves Iran Facebook campaign, which has over 100,000 likes and drew attention for its effort to take peace talks directly to the people.

“What do you think of efforts like this,” Clinton asked in an email to her then-Senior Advisor for Innovation Alec J. Ross. “Even if dismissed as naïve, can non-violence organize in the cyber space (sic) btw adversaries and influence decision makers?”

Ross, a technology expert who has stated opposition to online surveillance, harshly dismissed the campaign with skeptical views of the intentions of both Iranian and Israeli citizens.

“Unfortunately, I take a negative view of the Internet in this respect. The Internet tends to amplify and empower voices at the edges and is a difficult space for moderation and to achieve compromise. We’ve seen it in our own (American) politics where it has strengthened the edges, the net roots on the left and the tea party on the right, while punishing those trying to find common ground as accommodationist. This is partly why so many of our candidates are getting pushed to the poles … In my view, the only way non-violence could be organized in the cyber space btw adversaries and influence decision makers is if the citizens of the countries in conflict are ALREADY strongly averse to violence, and the Internet then creates a transnational bond working in opposition to their respective governments. I don’t know that this is the case with either Israel or Iran.”

There was no further response from Clinton included in the current release of emails.

The over 5,000 new emails are available to the public on the U.S. Department of State’s website here.