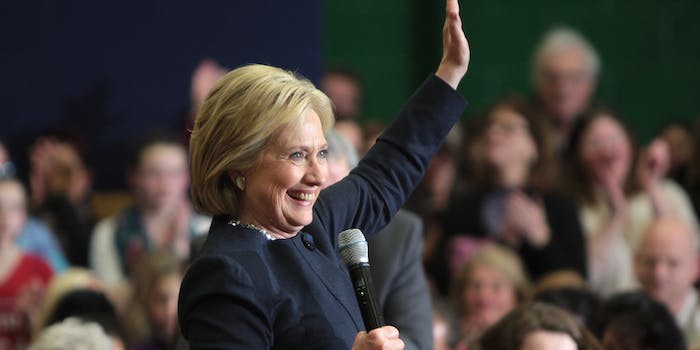 It was a close race, but Clinton prevailed.

Hillary Clinton won the Illinois Democratic primary on Tuesday night, prevailing in a close race and cementing her lead as her party’s front-runner.

With 93 percent of precincts reporting, Clinton held onto 50.6 percent of the votes to challenger Bernie Sanders‘s 48.6 percent—a difference of just 2 points.

Results in Illinois were closer than in three of the other four states that voted on Tuesday—Florida, North Carolina, and Ohio—but Clinton eventually prevailed over her sole remaining rival, Vermont Sen. Bernie Sanders.

Illinois awards its 102 delegates proportionally, and early results suggested that Clinton would receive just over half of them.

According to exit polls, the former secretary of state won African-Americans, voters older than 45, and women, while Sanders won whites, younger voters, and men.

In the days leading up to the vote, Sanders tried to turn Illinois voters against Clinton by tying her to embattled Chicago Mayor Rahm Emanuel, the former White House chief of staff whose controversial policies have enraged liberals in his city. That strategy evidently did not convince enough undecided voters to sway the results.

Illinois is considered “a microcosm of the nation,” with demographics that align closely with national statistics.