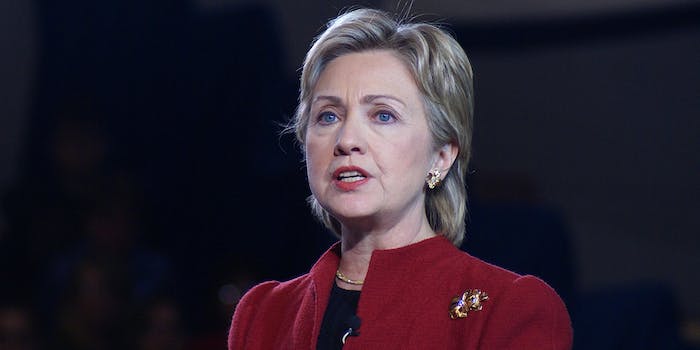 "If he were concerned and wanted to be part of the American debate, he could have been."

Hillary Clinton, the presumptive frontrunner for the 2016 Democratic Party presidential ticket, has taken a stand against Edward Snowden.

In a discussion Thursday evening at the University of Connecticut, the former secretary of state gave what her strongest comments yet against Snowden, the former National Security Agency contractor who passed a huge cache of agency documents to a handful of journalists in May 2013.

Clinton indicated that her reasoning was partly based on President Obama’s previous claims that he had intended to begin revealing some information of NSA practices. Clinton said:

“If he were concerned and wanted to be part of the American debate, he could have been. But it stuck me as, I just have to be honest with you, as sort of odd that he would flee to China—because Hong Kong is controlled by China— and that he would then go to Russia, two countries with which we have very difficult cyber relationships, to put it mildly. And I don’t understand why he couldn’t have been part of the debate here at home. He could have quit, he could have taken whistleblower protection.”

Snowden initially fled to Hong Kong from the U.S., and was grounded during a connecting flight through Moscow, when the U.S. revoked his passport and charged him with violating the Espionage Act. Snowden stayed in the airport’s international zone for weeks before Russia granted him temporary asylum, and he has said he gave all his copies of NSA documents to journalists before leaving Hong Kong. Chelsea Manning, a former U.S. Army Intelligence officer who passed military information and damning video footage to WikiLeaks, is currently serving a 35-year prison sentence for violating the Espionage Act.

Clinton had previously hedged on Snowden, calling for an “open debate” on his revelations but not condemning or praising him. Rand Paul, one of the frontrunners for the Republican nomination, has called for relative leniency on Snowden.