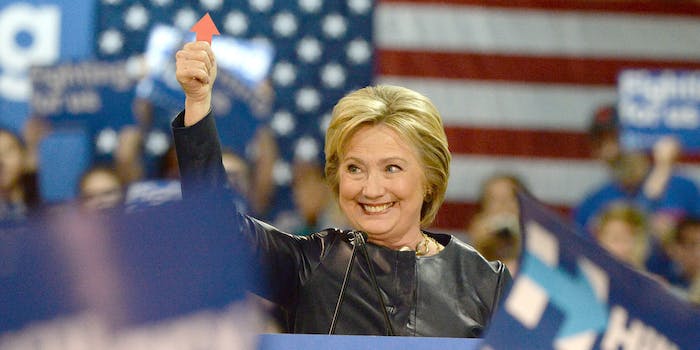 Republican lawmakers are not letting this one fall through the digital cracks.

What started as a literal conspiracy theory on Reddit has evolved into a multi-pronged congressional investigation into Democratic nominee Hillary Clinton‘s emails.

Earlier this week, Reddit users uncovered posts from user “stonetear” asking one of the social news site’s IT communities for help in scrubbing the email address of an unnamed “VERY VIP” person.

“Hello all- I may be facing a very interesting situation where I need to strip out a VIP’s (VERY VIP) email address from a bunch of archived email that I have both in a live Exchange mailbox, as well as a PST file. Basically, they don’t want the VIP’s email address exposed to anyone, and want to be able to either strip out or replace the email address in the to/from fields in all of the emails we want to send out. I am not sure if something like this is possible with PowerShell, or exporting all of the emails to MSG and doing find/replaces with a batch processing program of some sort. Does anyone have experience with something like this, and/or suggestions on how this might be accomplished?”

The posts were made on July 23, 2014, one day after the State Department agreed to hand over Clinton’s emails to the House Benghazi Committee, according to the FBI‘s investigation into Clinton and her staff’s handling of classified information during her time as secretary of state.

Further digging found that Paul Combetta, the Platte River Network IT specialist who deleted Clinton’s emails from her private system, used multiple accounts with the screen name “stonetear,” as well as the email address “[email protected]” When redditors’ dot-connecting began to gain steam on the site, “stonetear” deleted the posts—but other users had already archived them, and the conspiracy theory quickly became full-blown news.

Since then, the House Oversight Committee and the chairman of the House Science Committee have launched inquiries into the stonetear Reddit posts.

While evidence points to Combetta being “stonetear” on Reddit, nothing has yet been confirmed—nor is it clear that the “VERY VIP” person is Clinton. The Clinton campaign said that Combetta deleted Clinton’s emails himself, without direction from her or her staff.

However, if Combetta did make the posts and Clinton was the VIP, it could prove to be highly detrimental to those involved, according to Science Committee Chairman Lamar Smith (R-Texas).

“If true, these details raise new questions as to whether Platte River Networks purposefully defied legal documentation requirements,” wrote Smith in a letter to Platte River’s attorney. “Further, it is unclear if the Federal Bureau of Investigation was aware of these facts at the time of their investigation.

“Additionally, I am concerned that Mr. Combetta may have made an attempt to delete relevant posts, including the post mentioned above, from his reddit.com username just hours after reports initially surfaced on September 19, 2016, about his request for assistance on deleting email addresses from archived emails. This raises significant concerns that materials directly related to the Committee’s investigation and responsive to its outstanding requests are being actively destroyed in an attempt to conceal relevant information from coming to light.”

On Thursday, the Hill reported that the House Oversight Committee has asked Reddit to preserve stonetear’s deleted posts. A Reddit spokesperson did not immediately respond to our request for details about the committee’s request.

“I’m very confident that the amount of circumstantial evidence certainly points in one direction,” Rep. Mark Meadows (R-N.C.), chair of the Government Reform subcommittee, told the Hill.  “We’re just trying to make doubly sure that we can authenticate that in a real way, because if not it will be challenged on a number of fronts.”

The Justice Department has granted Combetta immunity for his cooperation, and he invoked his Fifth Amendment rights against self-incrimination when summoned to testify before the Oversight Committee.

On Thursday, the Oversight Committee voted to hold Clinton IT specialist Bryan Pagliano in contempt of Congress for refusing to testify before the committee. Like Combetta, Pagliano received and immunity deal from DOJ; however, neither man has received such a deal from Congress.