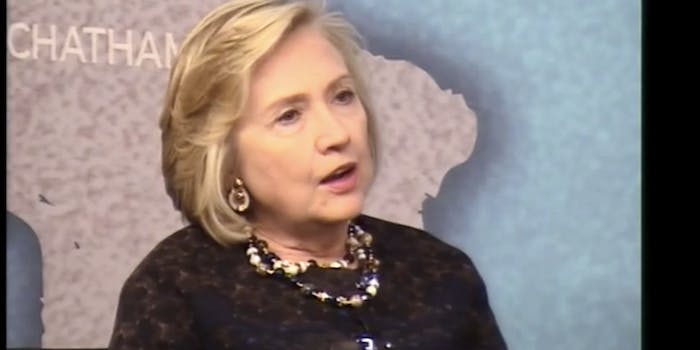 The former secretary of state said a nationwide discussion on surveillance needs to be “as transparent as it can be.”

But given that she could be the next president of the United States, that might not be enough for privacy advocates.

Clinton made the remarks during a formal discussion following her acceptance of Chatham House’s prize honoring her work as formal secretary of state. Considered the early frontrunner for the 2016 Democratic candidate for president, Clinton said a nationwide discussion on surveillance needs to be “as transparent as it can be.”

Her words, however, echoed those of President Obama, who has repeatedly called for an “open debate” on NSA surveillance since former agency contractor Edward Snowden released scores of documents to the public through several news outlets. Obama has, however, been criticized as not actually facilitating such a discussion. Though Director of National Intelligence James Clapper’s office has begun declassifying Foreign Intelligence Surveillance Court rulings on its seemingly pro-transparency Tumblr, it’s ignored the fact that some of those disclosures were prompted by activists’ legal lawsuits.

Clinton also made similar statements to former NSA Director Bobby Ray Inman, who has argued that private American companies’ tendency to track Americans through data-mining is far more invasive than NSA practices. “I also know, at least speaking for the United States, much more personal information about many more Americans is held by businesses in the United States than by our government,” she said.

She also noted that the problem is “a little over a decade old,” nodding to recent technological advances and the fact that the NSA’s collection of American data rose rapidly in the immediate wake of the Sept. 11 attacks.

“People need to be better informed,” she added.

The middle ground is a contrast to remarks made by early Republican presidential candidates. Senator Rand Paul (R-Ky.) and New Jersey Chris Christie have already traded jabs over the importance of NSA spying. Paul has called it “unconstitutional.” Christie has responded simply that “they work.”

H/T The Guardian | Screengrab via ChathamHouse10/YouTube