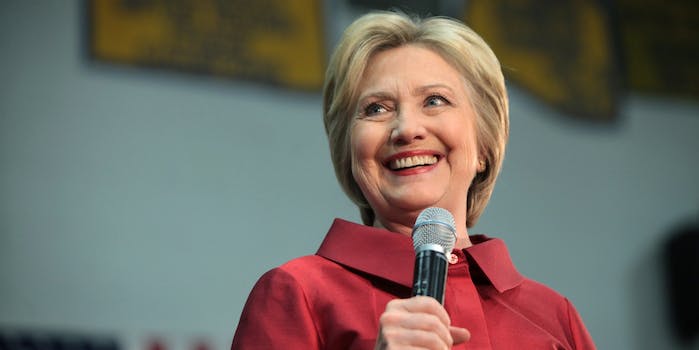 Now that Jill Stein has raised more than $5 million and officially filed a petition to recount the Wisconsin presidential election vote, Hillary Clinton is joining forces with the Green Party’s former presidential candidate.

In a blog post written on Medium, Marc Elias, the Clinton campaign’s general counsel, wrote that even though the campaign hadn’t discovered any evidence of hacking, it’ll participate in the recount process.

“Because we had not uncovered any actionable evidence of hacking or outside attempts to alter the voting technology, we had not planned to exercise this option ourselves, but now that a recount has been initiated in Wisconsin, we intend to participate in order to ensure the process proceeds in a manner that is fair to all sides,” Elias wrote. “If Jill Stein follows through as she has promised and pursues recounts in Pennsylvania and Michigan, we will take the same approach in those states as well.”

Stein said Friday that the 2016 election was “a hack-riddled election” and that, “we are standing up for a voting system we deserve, that we have confidence in, that has integrity and security and that we know is not subject to tampering, malfeasance, hacking, and so on. We deserve that in this election and every election.”

Stein has made it clear that she’s not doing it to help Clinton in a bid to somehow overturn Donald Trump’s victory. Instead, she said she simply wants fair election results. But there’s little question that a recount could help Clinton, who has earned at least 2 million more popular votes than Trump.

The Wisconsin deadline to petition for a recount was Friday, while the deadlines for Michigan and Pennsylvania occur next week. As of this writing, Stein has raised more than $5.7 million to force a recount in all three states.

Still, it appears the Clinton campaign isn’t hoping for some kind of miracle.

“We [are] fully aware that the number of votes separating Donald Trump and Hillary Clinton in the closest of these states —Michigan—well exceeds the largest margin ever overcome in a recount,” Elias wrote. “But regardless of the potential to change the outcome in any of the states, we feel it is important, on principle, to ensure our campaign is legally represented in any court proceedings and represented on the ground in order to monitor the recount process itself.”

Stein said Friday that 110,000 people have donated to the cause at an average of $45 per donation. Clinton’s team appreciates it.

“The campaign is grateful to all those who have expended time and effort to investigate various claims of abnormalities and irregularities,” Elias wrote. “While that effort has not, in our view, resulted in evidence of manipulation of results, now that a recount is underway, we believe we have an obligation to the more than 64 million Americans who cast ballots for Hillary Clinton to participate in ongoing proceedings to ensure that an accurate vote count will be reported.”

Trump’s combined voting lead in those three states is about 107,000.