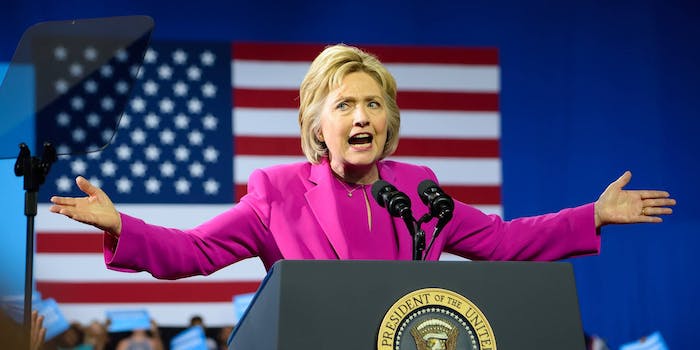 Hillary Clinton is gaining the support of an unlikely source: fellow candidate Bernie Sanders. The presumptive Democratic nominee laid out additional details to her proposed healthcare plan on Saturday in a briefing posted to her website.

Sanders issues a series of tweets praising the plan, which includes a reiteration of support for universal healthcare to all as well as more liberal policies that skew towards the Vermont senator’s rhetoric.

The goal of health care reform in America is to guarantee health care for all as a right, what every other major country on earth does.

Today's proposal by @HillaryClinton is an important step toward expanding health insurance and health care access to millions of Americans.

Efforts to give Americans a public-option choice and to expand Medicare by allowing people to opt in at 55 years are important steps.

Together these steps will get us closer to the day when everyone in America has access to quality, affordable health care.

Of particular interest is the push for government provided public options, which Clinton had yet to explicitly endorse. Under her latest proposal, Clinton would move to expand Medicare to those 55 and older as well as meet with governors of the 19 states that have opted out or fought Medicaid extensions.

Clinton’s plan appears to double down on her support of the Affordable Care Act as well, though she states that its expansions could use to go a bit further:

The Affordable Care act significantly expanded mandatory funding for FQHCs. As part of her comprehensive health care agenda, Hillary is committed to doubling the funding for primary care services at community health centers over the next decade. In doing so, we will dramatically expand access to millions more people. This means extending the current mandatory funding under the Affordable Care Act and expanding it by $40 billion over the next 10 years.

Hillary also supports President Obama’s call for a near tripling of the size of the National Health Service Corps, which will increase funding to $810 million in 2017 and grow over time to $1.3 billion by 2027.

Clinton has long been a proponent of healthcare reform. As first lady, she heavily lobbied in favor of providing universal healthcare to all citizens. Though the 1993 plan, colloquially dubbed Hillarycare, ultimately failed, Clinton’s lobbying was pivotal in the success and implementation of the State Children’s Health Insurance Program.

You can read the entire briefing on healthcare reform via Clinton’s website. Clinton and Sanders are set to hold a joint event on Tuesday in New Hampshire. The unveiling of a more robust healthcare reform proposal as well as Sanders’ support signifies a potentially more unified Democratic front.