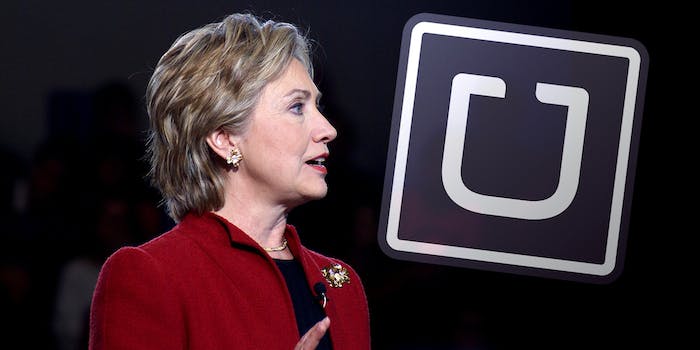 In her first speech outlining her economic plan, Clinton called out the likes of Uber and Lyft.

Becoming perhaps the first presidential candidate to do so, Hillary Clinton just called out the so called “Gig Economy”—that world of contractors, freelancers, and Uber drivers—in her first speech outlining her economic policy.

Clinton’s speech mentions reforming the tax code, profit sharing, education and focusing on a stronger middle class, all of which we’ve seen from Democratic candidates in years past. But in a mark of how the world has changed in recent years, Clinton briefly addressed what some call the “sharing economy” or what she called the “gig economy.”

“Many Americans are making extra money renting out a spare room, designing websites, selling products they design themselves at home, or even driving their own car. This on-demand or so called ‘gig economy’ is creating exciting opportunities and unleashing innovation,” Clinton said in her speech this morning. “But it’s also raising hard questions about workplace protections and what a good job will look like in the future. So, all of these trends are real, and none, none is going away. But they determine our destiny.”

Clinton also referred to it as the “1099 economy,” a reference to the tax forms independent contractors use. Such employers can skirt around providing things like healthcare, and makes it harder for employees to unionize.

Companies like Uber or Lyft, popular mobile applications used to hail a ride, employ all of their drivers as independent contractors, meaning they don’t have to provide things traditional employees receive like healthcare, maternity leave or severance pay. Last month, the California Labor Commissioner’s Office said Uber drivers should be classified as employees, not contractors. Uber is appealing the decision, filed a motion last week to oppose the certification of a class action lawsuit by drivers that question their status as employees.

“There’s a lot of potential for legislative measures to put freelancers across industries in a more just working position. But I haven’t seen the political will to do any of this stuff yet,”  freelance journalist and illustrator Susie Cagle, who’s covered the ride sharing economy extensively, told the Daily Dot via email.

“I believe the employer portion of income tax that freelancers are burdened with should instead be the responsibility of any entity that issues a 1099—this would be a more equitable division of taxes for freelancers who are working for larger entities that also have employees,” she said.

“Of course, we also need legislation extending labor protections from the National Labor Relations Act to freelancers, but that is a much bigger political battle. What I actually think we’d see from Clinton, if anything, are far less creative challenges to this labor model—e.g. funding investigations into employee misclassification, which the Obama administration has done. That’s nice, but it doesn’t really challenge the new status quo.”

The gig economy is slowly becoming a significant part of the American workforce. Uber alone says they have 162,037 active drivers as of December 2014. The company also boast a staggering $40 billion valuation.

Of course, not every presidential candidate agrees with Clinton’s approach.

.@HillaryClinton's ideas about Uber and Lyft are out of touch. We need more innovation, not less.