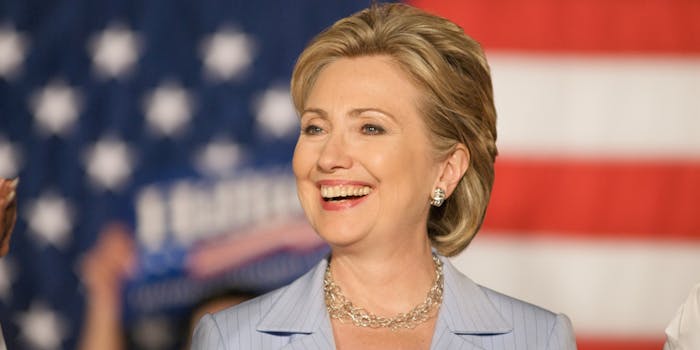 'State's technology is so antiquated that NO ONE uses a State-issued laptop.'

Former Secretary of State Hillary Clinton agreed with a top State Department aide that the department’s “antiquated” email system pushed people into using private email accounts, according to newly released emails from her own private account.

Anne-Marie Slaughter, the former Director of Policy Planning at the State Department, sent an email to Clinton on June 3, 2011, to suggest that someone raise awareness of department email woes. The previous day, Google had revealed that Chinese hackers tried to steal senior government officials’ Gmail credentials.

“It it would be a great time for someone inside or outside to make a statement [or] write an op-ed that points out that State’s technology is so antiquated that NO ONE uses a State-issued laptop,” Slaughter wrote, “and even high officials routinely end up using their home email accounts to be able to get their work done quickly and effectively.”

Clinton agreed with the idea, writing, “I think this makes sense. How should we follow up?”

Cheryl Mills, Clinton’s counselor and chief of staff, then replied that it would be better for a former employee to raise awareness of the issue. “I am not sure we want to telegraph how much folks do or don’t do off [S]tate mail [because] it may encourage others who are out there,” she told the secretary.

Slaughter then agreed and suggested that Clinton instead “make the point more quietly to legislators.”

“I can’t confirm whether this was addressed with Congress,” Alec Gerlach, a State Department spokesman, told the Daily Dot in an email.

The revelation that Clinton used a private email account on a private server as secretary of state has roiled her campaign for the Democratic presidential nomination. Republicans and even independent security experts have repeatedly accused her of exposing sensitive government data to hackers by sidestepping the State Department’s email system, which, while apparently beset with issues, was considered more secure than a private server.

The State Department revealed on Tuesday that it did not configure Clinton’s server to process the highest level of classified information, because the server was not stored somewhere safe enough to hold that kind of information.

Slaughter wrote in her initial email to Clinton that “further cuts to State’s budget just [make] matters much much worse,” adding that the department needed to “significantly upgrade our technology.”

Photo via kakissel/Flickr (CC BY 2.0)