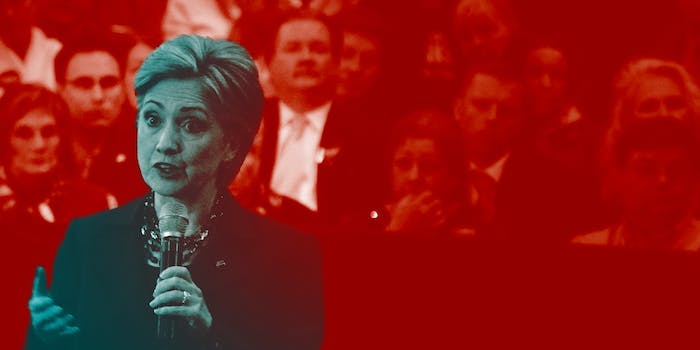 Emailgate ratchets up another notch.

Hillary Clinton‘s personal email account may soon be the subject of a federal investigation.

The New York Times, citing “senior government officials,” reported late Thursday night that two inspectors general have requested that the Department of Justice open a “security” investigation into the possibility of mishandled classified information on Clinton’s personal email server, which she used during her time as secretary of State.

The Associated Press and NBC News say they have confirmed the requests to launch an investigation.

It is not currently clear whether a potential investigation would target Clinton herself, and the DOJ has reportedly not yet decided whether to launch an investigation.

The State Department has so far received 55,000 emails from Clinton’s staff; of those, 3,000 have been released to the public, as part of a court-ordered monthly release plan. Some two dozen of the released emails were redacted before the State Department made them public because they contained information with “classified status,” the Times reported.

News of the requested probe follows a June 29 memo from State Department inspectors general that found “hundreds of potentially classified emails,” according to the Times.

State Department Under Secretary for Management Patrick Kennedy, the author of the memo, wrote a second memo on July 17 that reportedly said that at least one of the emails released to the public contained classified information.

Clinton, the current frontrunner for the 2016 Democratic presidential nomination, has repeatedly asserted that she handled all information properly and that any currently classified information sent through her personal email was not classified at the time it was sent.

“As has been reported on multiple occasions,” Merrill added, “any released emails deemed classified by the administration have been done so after the fact, and not at the time they were transmitted.”

Update 7:45am, Aug. 5: Following the New York Times‘ publication, multiple outlets confirmed with Justice Department officials that the potential inquiry into Clinton’s email was a “criminal referral.” However, officials later told the Times that it was, in fact, a “security referral.” We have updated our story and headline to reflect the new information.