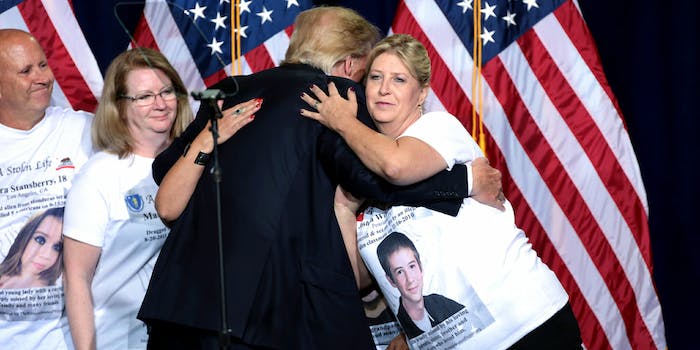 Clinton and Comey reveal the uncomfortable truth about Trump’s hugs

A hug from Trump is not what it seems.

In the world of American politics, high-level operators have a concern you may have never even considered: a hug from Donald Trump.

New details emerged this week about President Trump using a hug as a power move meant to make the recipient of the squeeze appear more friendly with him than they actually are.

A New York Times report published on Thursday evening revealed that former FBI Director James Comey once “tried to blend in with the blue curtains in the back of the room” of an event Trump held for law enforcement following his inauguration in an attempt to avoid any appearance of friendship between Comey and Trump.

Comey’s efforts failed when Trump finally noticed him and pulled him in for an uncomfortable embrace.

Benjamin Wittes, editor-in-chief of Lawfare and a friend of Comey’s who provided the Times with details of the former FBI director’s thinking, provided more details in his own recounting of Comey’s thoughts on “the hug.”

The hug took place at a White House meeting to which Trump had invited law enforcement leadership to thank them for their role in the inauguration. Comey described really not wanting to go to that meeting, for the same reason he later did not want to go to the private dinner with Trump: the FBI director should be always at arm’s length from the President, in his view. …

… The meeting was nearly over, [Comey] said, and he really thought he was going to get away without an individual interaction. But when you’re six foot, eight inches tall, it’s hard to blend in forever, and Trump ultimately singled him out—and did so with the most damning faint praise possible: “Oh, and there’s Jim. He’s become more famous than me!”

Comey took the long walk across the room determined, he told me, that there was not going to be a hug. Bad enough that he was there; bad enough that there would be a handshake; he emphatically did not want any show of warmth.

It turns out, however, that Comey—whom Trump abruptly fired on May 9, setting off a firestorm of political controversy—was not the only person worried about Trump’s penchant for public displays of affection.

Philippe Reines, a political consultant and former adviser to Hillary Clinton during her time as secretary of state, served as a stand-in for Trump during Clinton’s 2016 presidential debate preparations. On Friday, Reines posted a video in which Clinton attempted to deflect a hug from Trump at the start of the debate.

Not easy to avoid the unwanted Trump hug, sometimes it even takes practice…

So, the next time you see Trump attempt to hug someone, look at that person’s face. Does it look like they’re enjoying it—or did they just get played?