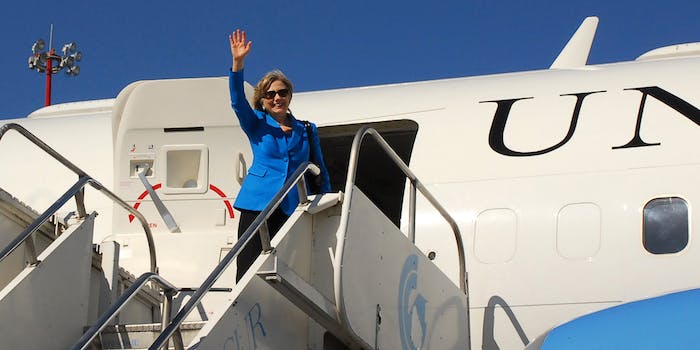 Clinton defenders: email scandal isn’t a big deal; the government gets hacked all the time

But is it too little, too late?

A prominent rapid response group that backs Hillary Clinton’s bid to become president is defending her use of a private email server while she was Secretary of State.

Because, after all, the government gets hacked all the time.

That’s the finding of a report, released on Friday by the group Correct The Record. It asserts that Clinton’s email server, though not run through standard government channels, remained secure against cyberattacks. The same, the report argues, cannot be said for a litany of other governmental computer systems.

“From Edward Snowden’s theft of millions of classified national security documents, to WikiLeaks, to a hack of OPM that compromised personal information of more than 22 million people, the scope of recent breaches into private and top secret government servers is sweeping and well documented,” the report, which is entitled Hillary Clinton’s Email: Security Matters, asserts. “Even White House emails sent and received by President Obama were compromised. Anyone who attempts to argue that the contents of Hillary Clinton’s email would have been more secure on a government server must contend with these facts.”

The report says there been no evidence that Clinton’s email server was compromised at any point since its creation on the day of her Senate confirmation hearing in 2009. It also notes that no messages from the clintonemail.com domain were included in Chelsea Manning’s disclosure of thousands of classified States Department cables to WikiLeaks.

The only known instance when any emails from Clinton’s personal account were compromised occurred when a Romanian hacker going by the handle Guccifer accessed the AOL account of Clinton confidant Sidney Blumenthal. Guccifer, who was arrested last year, provided screenshots to Gawker of emails between Clinton and Blumenthal. The report noted Guccifer had accessed the correspondence through a weakness in Blumenthal’s security, rather than Clinton’s, and quoted a Guardian interview with a Stanford computer scientist who said Clinton’s system, “had been set up by somebody with some expertise in security who went out of their way to add protection.”

Founded by David Brock, who also created the left-leaning media watchdog Media Matters For America, Correct The Record aims to function as a rapid-response team to push back against negative attacks on Clinton during the campaign. Decades before Brock became an effective part of the Clinton campaign, he was a conservative operative, famous for penning hit pieces against liberal targets like Anita Hill and even Clinton herself. Brock eventually fell out with the conservative movement and hopped over to the other side of the aisle, a conversion he detailed in his book Blinded By The Right.

While the group is technically independent from the campaign, allowing it greater freedom in its ability to take unlimited donations, it is directly coordinating with Clinton’s official organization—a move that appears to be pushing the limits of campaign of campaign finance law.

In the Citizens United Supreme Court that unleashed a torrent of super PAC money into the American political system, the nation’s highest court ruled that independent organizations could raise and spend unlimited funds for political purposes as long the outside group’s activities weren’t directly coordinated with the campaign itself.

However, as the Washington Post reports, Correct The Record is coordinating directly on its messaging with the Clinton campaign by relying on a 2006 Federal Election Commission ruling that exempts content posted online for free from having to comply with regulations. Since Correct The Record exclusively posts content like its recent report online, and doesn’t do paid placements like TV or Facebook advertisements, the group can directly coordinate on messaging.

As such, the timing of this report comes in tandem with an effort by the Clinton campaign’s effort to limit the damage caused by the email scandal. Earlier this week, Clinton formally apologized for using the private account to conduct official government business in an interview with ABC News. “As I look back at it now, even though it was allowed, I should have used two accounts,” said Clinton. “That was a mistake. I’m sorry about that. I take responsibility.”

Clinton’s support among Democratic voters has dipped in recent months. A recent CNN/ORC poll showed her with only a ten point lead over challenger Bernie Sanders.

Correction: A previous version of this story referred to Correct the Record as a Super PAC. It is a rapid response group.