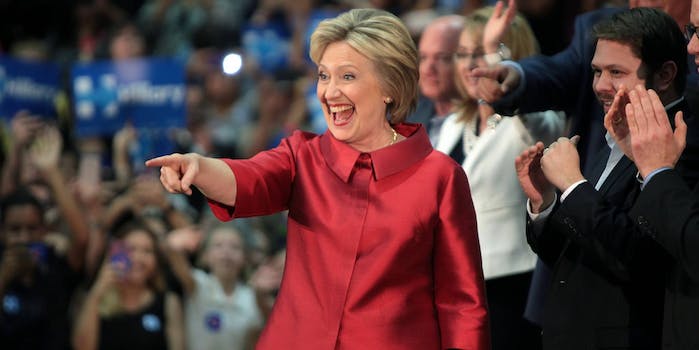 This was the biggest race of the last major night in the Democratic primary.

Tonight caps an amazing journey—a long, long journey,” Clinton told a roaring crowd in Brooklyn on Tuesday evening, ahead of the California results. “We all owe so much to those who came before, and tonight belongs to all of you.”

California, with its 475 pledged delegates, was the final major prize in a six-month duel between Clinton and Sanders for the Democratic Party’s presidential nomination, a race that became unexpectedly tough for Clinton right out of the gate due to Sanders’s victory in Iowa.

The Sanders campaign had hoped for a similar upset in California that would create panic within the party about the prospect of nominating a weakened frontrunner for a November clash with presumptive Republican nominee Donald Trump.

Sanders stood no real chance of winning the nomination even if he had prevailed in California, despite his staff’s protestations to the contrary.

Exit polls had consistently suggested that Clinton would win the state, though Clinton’s team sought to manage expectations in interviews before the polls opened.

Despite Clinton’s decisive victory, Sanders promised to stay in the race until the Democratic National Convention in Philadelphia in late July.

President Barack Obama “congratulated” Clinton in a phone call on Tuesday night for clinching the Democratic nomination, the White House said in a press release. He also “thanked” Sanders for “energizing millions of Americans with his commitment to issues like fighting economic inequality and special interests’ influence on our politics.”