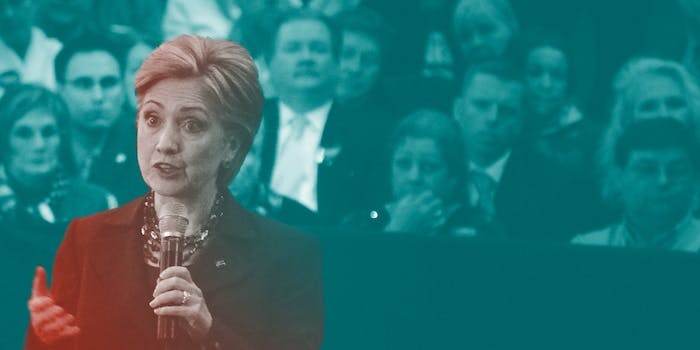 This is shaping up to be a common stance for Democrats.

In laying out her economic plan for the first time Monday, presidential candidate Hillary Clinton has called for increased federal investment in faster broadband networks.

If elected president, she said, she will “make sure there is a greater diversity of providers so consumers have more choice.”

Clinton, who introduced successful legislation for increased investment in rural broadband while she was a senator, laid out her latest vision for the United States’ economic future in a major policy address at the New School in New York City on Monday morning.

“With increasing concentration in the industry, there are now de facto telecommunications monopolies in the United States,” the senators wrote. “For example, just 37 percent of Americans have more than one option for high-speed broadband providers.”

Sanders and Clinton are the two frontrunners in the Democratic race for the 2016 Presidential nomination.

The letter from the senators specifically criticized the proposed merger between Time Warner Cable and Charter Communications as increasing the concentration toward monopolies in the broadband industry even further.

Although Clinton hasn’t gone into very much detail on her position here, the brief mention of the issue in a major policy speech is significant in that it appears she’s increasingly aligning with Sanders’ position.

While the two most visible Democrats in the country right now appear to be agreement, some Republican candidates are taking a different tack. Sen. Rand Paul (R-Ky.) said earlier this year that he doesn’t “want to see regulation of the Internet.”

Overall, however, the issue of Broadband monopolies has yet to break across the Republican side of the 2016 race.