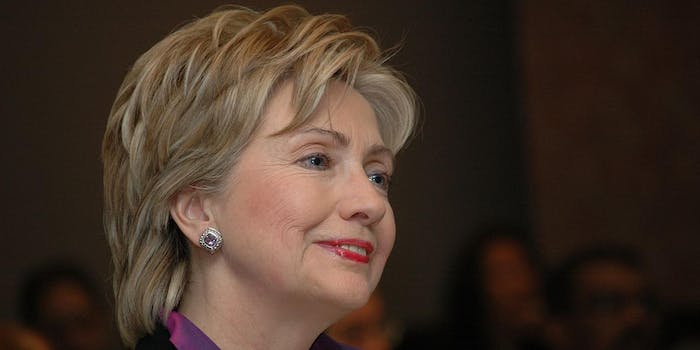 Will gay rights be a major issue of her campaign?

Two things immediately stood out about the video Hillary Clinton used to formally announce her intention to seek the 2016 Democratic presidential nomination. The first is that the candidate herself didn’t make an appearance until two-thirds of the way into her own spot. The second is that the clip featured two different same-sex couples.

The video begins by showing everyday Americans talking about their plans for the rest of 2015. People mentioned everything from starting their own businesses to planting a new crop of tomatoes in their gardens.

Midway through, the video features a same-sex couple holding hands. “I’m getting married this summer to someone I really care about,” one of the men says in a voiceover.

Later, the video shows a lesbian couple touching heads in a tender moment.

The video suggests that Clinton will be making gay rights a major touchstone of her campaign. Shortly after the announcement went live online, some in the LGBT community quickly showed their support for Clinton.

LPAC, which bills itself as “the country’s first and only lesbian political action committee,” announced it would not only be supporting Clinton’s quest for the presidency, but also launch a Lesbians 4 Hillary campaign co-chaired by tennis legend Billie Jean King.

The former First Lady, New York senator, and Secretary of State’s position on gay marriage has gradually evolved over the years: She was quiet on the issue as First Lady during the ’90s but foregrounded gay rights as an important frontier in the fight for international human rights.

She was asked last year by NPR’s Fresh Air host Terry Gross about where she stood on same sex marriage in the ’90s, when her husband’s signed into law the Defense of Marriage Act. When talking about the bill, which allowed states to refuse to recognize marriage licenses granted to same-sex couples by other states, Clinton took a federalist stance.

“For me, marriage had always been a matter left to the states,” Clinton told Gross, noting her thinking on the issue has shifted over time in line with much of the rest of the country. “I think I’m an American, and I think we have all evolved.”

Part of that evolution involved advocating for the Defense of Marriage Act’s repeal while serving in the Senate. The law was eventually declared unconstitutional by the U.S. Supreme Court.

Recently unearthed documents from the National Archives at the Clinton Library showed that her staff pushed for President Clinton to veto the bill and that Hillary personally fought against a Republican effort to ban unmarried couples from adopting children near the tail end of her husband’s tenure in office.

During the 2013 Aspen Ideas Festival, Clinton slammed Russia’s increasingly anti-gay policies and endorsed same-sex marriage. However, she was criticized for riding just behind the wave of public opinion, which had been rapidly shifting in that direction for years, rather than leading the push. Shortly thereafter, the Economist called Clinton’s “farcically late” shift on the issue “cautious to the point of cowardice.”

Despite the long-standing existence of gay groups on the right like the Log Cabin Republicans, gay voters overwhelmingly support Democrats. A 2014 Gallup survey found that 63 percent of LGBT respondents lean Democratic versus only 21 percent who support Republicans.

According to 2012 exit polls, just over three-quarters of voters who identified themselves as gay, lesbian, or bisexual supported President Obama in his reelection bid over former Massachusetts Governor Mitt Romney. An analysis showed that, while Romney may have achieved a slight advantage with heterosexual voters in the key swing states of Ohio and Florida, Obama’s wide margin with gays may have helped push him over the top.

In that sense, the Clinton campaign’s early public embrace of the LGBT community is also an example of canny politics. The reaction on Twitter to the couples’ inclusion in the video was largely positive, but dusted with the light coat of cynicism endemic to national politics.

Update 6:30pm CT, April 12: The story has been updated to include information about Clinton’s LPAC endorsement.

Photo via SEIU/Wikimedia Commons (CC BY 2.0)