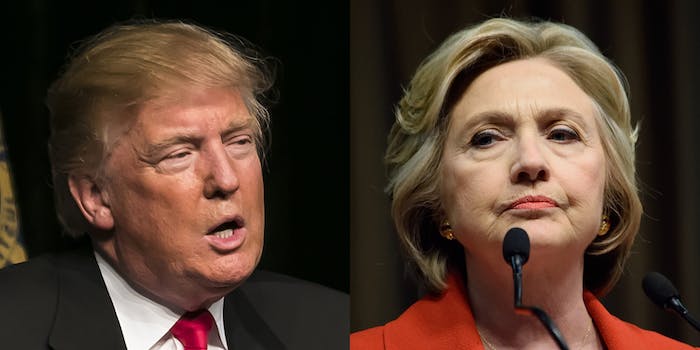 A new Rasmussen poll brings the speculation to a fever pitch.

Since 2007, there have been three whole Spider-Man franchises. First Tobey Maguire, then Andrew Garfield, and now Tom Holland.

In one fewer year, we’ve had three different iterations of the Joker.

Hollywood is stuck in an endless cycle of remakes and reboots, and since politics is downstream from culture, it makes sense that instead of doing something unique, new, and weird in 2020 (perhaps a true progressive running on a leftist platform), we’re just gonna go back to the old hits that make us comfortable, tweaked around the edges to give them the veneer of something fresh.

It’s why Joe Biden has been polling so well and why we’re seeing Hillary Clinton tweet defiantly at President Donald Trump.

Don’t tempt me. Do your job.

It’s Clinton, but just a little … twisted. Think hair a little more silver than grey and sending a used condom to Robby Mook after he tells her not to go to Wisconsin again.

Hillary 2020 has reached a fever pitch, in the wake of a Rassmussen Poll showing she would defeat Trump in a hypothetical election.

Forget the fact that she didn’t defeat Trump in a literal election and that every brand name and generic Democrat (both your Elizabeth Warrens and your Steve Bullocks) all are polling above Trump.

It’s the same calculus that leads Warner Bros. to reboot Suicide Squad 45 minutes after the movie was panned by every critic on the face of the earth. It’s opened to $145 million! Who cares if it’s tired, uncreative, haggard, and has that dude from House of Cards whose shoulders are absurdly far away from his head?

We’ll bring back Will Smith, and Margot Robbie, and change the alligator to a crocodile. We’ll do the Joker again, but this time he’ll be played by… Oscar Isaac. People will go nuts.

It’s got a built-in base that isn’t going anywhere, so why bother trying something new.

While you know you are dooming yourself to failure, it’s a failure you can point to and say “if only,” putting the blame on a small variable of inconsequential factors. We’ll get Clinton feigning at changes that doomed her last campaign—this time I’m running for something and not against someone—and giving nods to policy that’s become popular that she doesn’t really believe in—I’m for an 18-year transition to a Medicare buy-in—instead of letting the world around her experience something new.

Hillary 2020. It’s happening because we live in a society that won’t let us anything else happen.