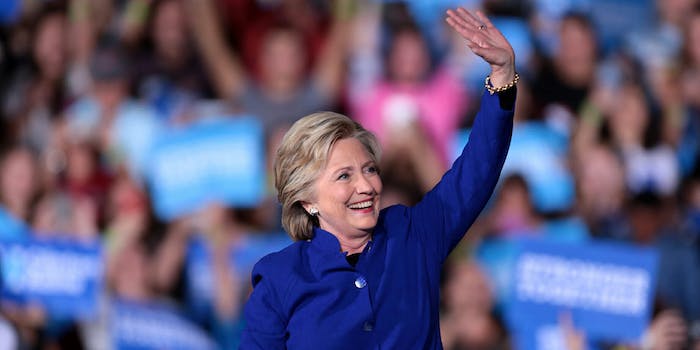 She has a plan to help Dems.

Former Democratic presidential candidate Hillary Clinton plans on selectively helping fellow Democrats ahead of the 2018 midterm elections without being involved enough to spur vitriol from conservative circles, according to a new report.

Clinton plans to use the clout she has in the Democratic party to help select candidates–specifically Democrats running in congressional districts she won during the 2016 election but elected Republicans for Congress, the Washington Post reports.

The Post spoke with more than a dozen people familiar with Clinton’s plans and found that her strategy is to keep below the radar enough that she would not become a target for Republicans during the upcoming election.

“She’s not going to be up front,” Jaime Harrison, a former chairman of the South Carolina Democratic Party and an associate chairman of the Democratic National Committee, told the newspaper. “She’s saying, ‘Listen, I’m no longer running but we need these groups to be strong and people to vote.’”

As for a possible 2020 election bid, that appears to be off the table.

While Clinton reportedly has a strategy of keeping a low profile for candidates, she has not been coy about her feelings regarding President Donald Trump in the months since her election loss.

In her new book What Happened, Clinton routinely makes it known that she has no love for the president and his policies.

Last month Clinton made a surprise appearance at the Grammys and read an excerpt of Fire & Fury, a book that painted a less-than-favorable picture of the turmoil inside Trump’s administration. Clinton received intense pushback from conservatives following her appearance, perhaps a sign of what would come should she have a more prominent role in the 2018 midterms.