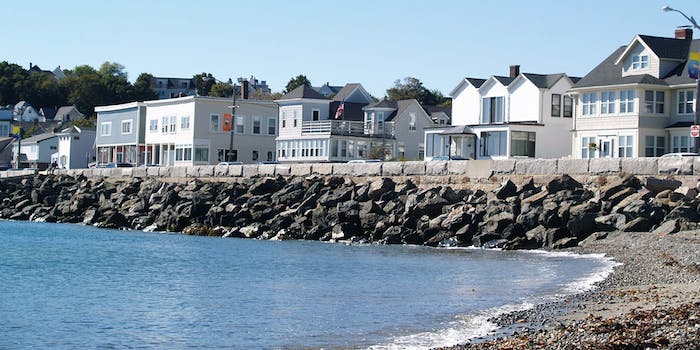 The tides are turning for these realtors.

In Paris, leaders from around the world recently gathered to take collective action in combatting climate change. In New York City, a real estate company is banking on the fact that those efforts will fail.

Meet Higher Tides Realty, an agency with its eyes on the current unspectacular locales that will soon become in-demand, waterfront property as rising ocean levels push the shores further inward.

“We can help you find currently undesirable and overlooked property, which will grow in value while other properties become uninhabitable,” the website for the realty company reads. It’s an absolutely shameless bit of profiteering that is fitting in a country so stubborn as to not take the drastic action it’s capable of taking to combat what science has deemed to be a very real issue.

If it sounds almost too surreal, well, it is.

Despite the litany of reports filed about Higher Tides Realty that can’t decipher if it’s a hoax or not, the site and promotional video are decidedly tongue-in-cheek. The idea for the service comes not from Jake Collins, the “Managing Real Estate Agent” pictured on the site, but from Nikolas Gregory.

The creator of Nikolas Gregory Studio, an activist art and design studio, Gregory told the Daily Dot that he and his team, “strive to not only make projects that are critiques but also projects that can actively participate in our surroundings.” Gregory said his goal is to “design systems that not only critique our world’s problems but also aim to fix them.”

Higher Tides Realty is unquestionably a critique of the inaction that has likely exacerbated the effects of climate change, as well as the opportunistic vultures who are likely to find opportunity in disaster. “I definitely expect people to profit from global warming,” Gregory said. “Just look at all the past disasters, from wars to epidemics. When there is a disaster, someone somewhere is going to profit from it.”

Gregory explained that the tone of Higher Tides Realty, which borders on parody, is important to the project. “Our goal was to somehow pair a very opportunistic feeling with a jarring and traumatic message.”

For most people, the climate change is still a very abstract thing; it hasn’t directly impacted their lives, so there is little urgency in taking action to respond to it. Pew Research found that just 30 percent of Americans “express serious concern about the personal effects of climate change.”

Gregory counts himself among those 30 percent. He said the idea for Higher Tides Realty came after his parents and friends lost their homes in 2012 when Hurricane Sandy hit the east coast.

The storm was an unlikely hybrid of a hurricane and a winter storm—which resulted in the two storms merging, known as the Fujiwhara effect—and turned out to be one of the costliest and deadliest storms to come from the Atlantic. Analysis of Hurricane Sandy have linked the increased severity of the odd occurrence to human impact on the environment.

“Knowing that storms like Sandy have only gotten worse in the last couple decades and will only increase, I decided that I needed to do something about this or at least express the urgency of the situation and get the public more involved,” he said.

Work began on the project two years ago, and the launch coincided with the United Nations summit taking place in Paris. Even with the tie-in of the largest conversation on the climate taking place, Gregory believes the hope doesn’t necessarily rest in legislation crafted at COP21 (the 21st Conference of the Parties) “It is people like you and me who collectively can make the difference,” he said. “Even if the difference we make today is small, the repercussions of our actions will be amplified by future generations.”

Higher Tides may operate in a heightened sense of reality where unscrupulous behavior takes places with no veiling, the information that it is working with is very real. The site links directly to the Intergovernmental Panel on Climate Change (IPCC)—a scientific body formed in 1988 by the World Meteorological Organization (WMO) and the United Nations Environment Programme and a sea level analysis called Surging Seas from nonprofit news organization Climate Central.

This information has helped Gregory arrive at some actual predictions as to what locations in the U.S. might become hot spots as climate change starts to level its impact on the rest of the country. He predicted Anchorage, Portland, and Seattle to be potential beneficiaries of climate-related migration, thanks in large part to massive changes that will take place in coastal cities out east.

That said, Gregory mad it clear that he believes “no place is entirely safe,” and that “all of the U.S. will start to experience side effects from global warming in the next 100 years. “

Despite warnings both overt and subtle scattered about Higher Tides’ Web presence, Gregory believes his project provides “a message of hope” because, “it enables people to view global warming as something that is able to be harnessed, something that we, as humans, can control…something that we can safely control and keep stable.”

It might be hard to find the optimism in Gregory’s message, but he insists it’s there. If the pitch of positivity doesn’t quite come through, then perhaps Higher Tides can serve as another ominous alert as to what might be in our future should we continue to remain stagnant as the ground moves beneath us.

“What if climate change effects are even worse than predicted? We should at least be able to cope with the side effects,” Gregory said. “It is a message to everyone that global warming can drastically change everything we do.  And if this is the case, we just have to be prepared and have an open mind about our future.”

If nothing else, perhaps some will take comfort in the idea that even as we destroy our own planet, someone will find a way to make money off of it. The world may be getting hotter but that is evidence that it just keeps on spinning, same as it ever was.

Photo via carabanderson/Flickr (CC BY 2.0)