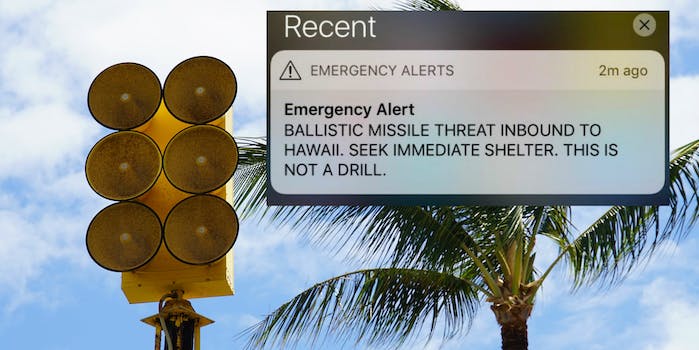 It appears the worker who sent off a false ballistic missile alert in Hawaii thought there was a real emergency. This contradicts earlier reports claiming the worker sent out the alert by accident.

On Jan 13., residents in Hawaii were woken by the text message, “BALLISTIC MISSILE THREAT INBOUND TO HAWAII. SEEK IMMEDIATE SHELTER. THIS IS NOT A DRILL.” The mistake set off widespread panic and confusion across the islands. Soon after, Hawaii Gov. David Y. Ige blamed the alarm on a state worker who “pressed the wrong button” from a drop-down menu.

The FCC swiftly launched an investigation into the incident and has now determined that the alarm wasn’t an accident at all, but was sent out intentionally by an official who believed the state was in danger.

The event leading up to the false alarm, as detailed in the report published by the FCC on Tuesday, only adds to the confusion.

Confirming previous reports, the false alarm happened during a shift change at the Hawaii Emergency Management Agency (HI-EMA). A midnight shift supervisor, pretending to be the U.S. Pacific Command, played a recording over the phone to day shift workers. It stated, “EXERCISE, EXERCISE, EXERCISE” but also “erroneously” included text for an emergency alert system message for a live ballistic missile alert that included the language “THIS IS NOT A DRILL.” The FCC points out that this does not follow the script outlined in HI-EMA’s operating protocol for the drill.

Most of the day shift workers knew the recording was a drill, but the person who sent the alarm wrote in a statement to HI-EMA that they thought it was a real emergency. So they followed protocol and selected “yes” from the drop-down menu that asks, “Are you sure that you want to send this alert?”

The next 38 minutes were a living nightmare for the 1.4 million residents of Hawaii. Their fears may have been quelled earlier if Ige hadn’t forgotten his Twitter login and password and could have alerted residents over social media.

The employee who sent off the alarm has not been publicly identified, but HI-EMA officials said they were terminated and had been a “source of concern.” There is no explanation for why they might have misinterpreted the drill instructions.

In a separate but related action, the FCC voted to improve the national emergency alert system so officials can target alerts to more precise locations. The new legislation, which will go into effect in November 2019, gives state employees the ability to send out alerts within a tenth of a mile of any given area.

The FCC is planning a news conference later today to go over the investigation results.