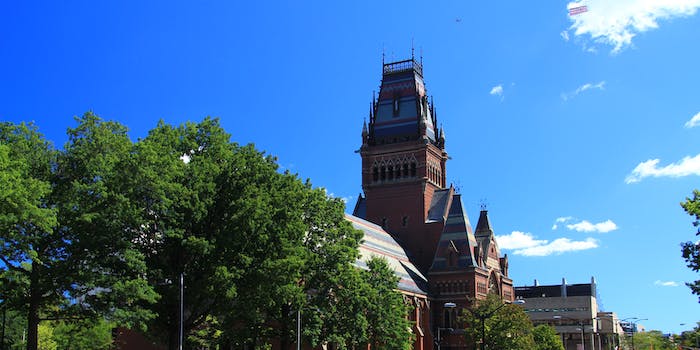 The university's satire magazine promised an endorsement for Trump.

A Harvard University student claims that President Donald Trump’s lawyer, Michael Cohen, threatened to have him expelled after a prank that involving the then-Republican candidate.

Tom Waddick is a staffer at the legendary campus satire magazine the Harvard Lampoon and told CBS’ 60 Minutes on Sunday that Cohen called him personally, following an elaborate stunt.

In 2015, a team of writers from the Lampoon stole the famed “president’s chair” from the offices of the university’s official student newspaper, the Harvard Crimson. Waddick and others contacted the Trump campaign, posing as the Crimson, to offer the candidate the publication’s “endorsement.”

The campaign team eagerly agreed, and the Lampoon staffers hauled the 200-pound chair to Trump Tower to photograph the Republican hopeful with the furniture.

Trump posed on the chair, surrounded by the pranksters, thumbs-up.

Days later, however, Cohen reportedly called Waddick when the campaign figured out the ruse.

“He says, you know, ‘I’m gonna come up to Harvard. You’re all gonna get expelled,’” the senior said of the call. “‘If this photo gets out, you’ll be outta that school faster than you know it. I can be up there tomorrow.’”

Worried Cohen “might actually be crazy enough to fly up” to the university in Cambridge, Waddick mailed his Harvard ID to the lawyer, as Cohen requested. By July, the pranksters had already published the fake Trump endorsement in an article headlined “Crimson Endorses Trump for President.”

Nothing came of the alleged phone call, but Cohen has been in the news in recent months for arranging the payment of $130,000 to adult film star Stormy Daniels in order to buy her silence over an alleged affair she’d had a decade earlier with the president.

Daniels, too, said she had an experience with a person threatening her on Trump’s behalf.