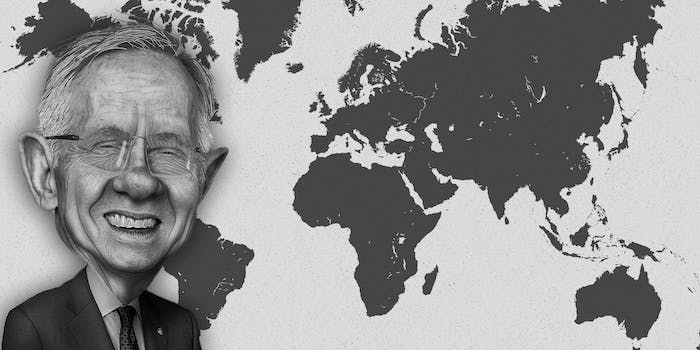 "Everyone would be well advised just to not push this right now," said Senate Majority Leader Harry Reid.

Senator Harry Reid (D-Nev.) has indicated that he will block key legislation to aid the quick passage of the Trans-Pacific Partnership, widely regarded by activists as a major threat to Internet freedom.

The TPP, a multinational trade agreement between a dozen Pacific Rim countries, including the U.S., is negotiated in secret by those countries’ respective trade representatives. Activists have found plenty to gripe about in many of those chapters, including the one on intellectual property, which they say would standardize overly harsh online copyright policies for each country.

A key strategy for those who want to see the TPP pushed through in its entirety in the U.S. is for Congress to renew a policy called Trade Promotion Authority. Often referred to as “fast track,” it would keep Congress from voting on individual elements of the TPP, and instead would have them vote on the agreement in its entirety. But the TPP in general, and fast track in particular, has grown decidedly less popular recently, as WikiLeaks has been obtaining and releasing the agreement’s secret chapters.

“I’m against fast track,” Reid told reporters Wednesday, reportedly noting that he might deny floor time for Senate Finance Committee Chairman Max Baucus (D-Mont.) to introduce it. Baucus is soon leaving to become ambassador to China, and his replacement, Ron Wyden (D-Oreg.), is perhaps the TPP’s most vocal critic in Congress.

Support for fast track is mixed, especially among Democrats, who almost completely oppose it in the House. But President Obama is a firm supporter, and mentioned in his State of the Union Address Tuesday that he wished Congress could come together on it.

“We’ll see,” Reid said. “Everyone would be well advised just to not push this right now.”