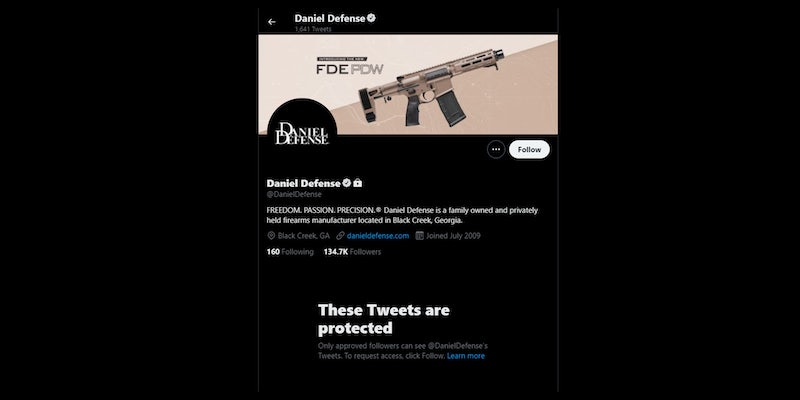 The company where the Uvalde mass shooter suspect procured the AR-15 he used to kill 19 children and two adults locked their Twitter account after being linked to the shooting. Its recent social media history includes a post quoting the Bible to justify training kids to use guns.

It also appears to be limiting comments on its Instagram.

On Tuesday, 18-year-old Salvador Ramos killed 21 people inside a fourth-grade classroom in Robb Elementary School in Uvalde, Texas. It’s one of the deadliest mass school shootings to date.

As the Daily Dot first reported, Ramos recently bought an AR-15 from Daniel Defense. It appears this is the weapon he used in the murders.

State police have confirmed that they found a Daniel Defense rifle beside Ramos’ body inside the classroom. Law enforcement responding to the shooting fatally shot him.

Daniel Defense didn’t respond to multiple requests for comment. Daniel Defense is a privately held gun manufacturer based in Georgia.

“At Daniel Defense, we celebrate the liberty of our country, the enthusiasm of our customers and employees, and the quality and accuracy of our products,” the company’s website states.

On Wednesday morning, social media users dug up one of the company’s tweets from May 16, the day Ramos turned 18 and purchased one of his weapons.

“Train up a child in the way he should go, and when he is old, he will not depart from it,” the tweet on its verified account read, a quote from the Bible. It included a photo of a small child holding an AR-15-style assault rifle.

Daniel Defense locked comments on all its Instagram posts sometime before Wednesday.

Some commented with screenshots of rifles Ramos posted in an Instagram story shortly before the shooting.

“A family-owned firm must be delighted that their products can so efficiently destroy the organs of the child in this photo,” wrote @getyrtrouserson.

It has not publicly responded to any posts calling it out.