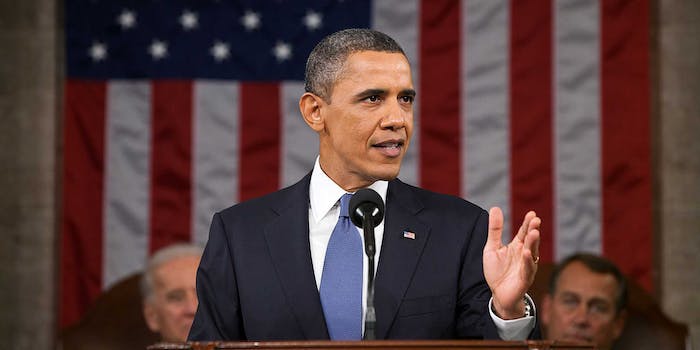 Special guests revealed for Obama’s State of the Union

President Obama will deliver his SOTU address with various guests seated with the First Lady.

The tradition of special guests sitting with the First Lady during the State of the Union address dates back to the Reagan administration. This year is no different, and according to an official White House release, it looks like Michelle Obama’s box will be brimming with notable Americans.

One high-profile guest is Alan Gross, a USAID subcontractor who was recently freed after five years of wrongful imprisonment in Cuba. The subject of Cuba and the ending of the embargo will be a talking point in President Barack Obama’s final SOTU speech; and it makes sense that Gross, a symbol of the positive effects of ending the U.S.-Cuba embargo, would be on hand. Gross will be accompanied by his wife, Judy, who fought tirelessly for his release.

The Gross family will also be joined by astronaut Scott Kelly, who is set to become the first American to live and work in space aboard the International Space Station for one year. He is the twin brother of retired astronaut Mark Kelly, husband of former Arizona Rep. Gabrielle Giffords, who survived an assassination attempt four years ago. Scott Kelly will be doing research from the ISS along with a crew and the White House hopes their findings will encourage students to explore STEM fields (science, technology, engineering, math.)

The Obamas also invited a number of letter writers, including Victor Fugate, a formerly unemployed new father who now works with low-income patients seeking medical care; Staff Sergeant Jason Gibson, U.S. Army, Ret., a wounded warrior and double-amputee, who completed multiple marathons on hand cycle; Malik Bryant, a 13-year-old from the South Side of Chicago whose letter to Santa this past Christmas asking “for safety I just wanna be safe” made its way to the White House, among others.

Among the other honored guests are Larry Merlo, CEO of CVS, students, a seal level rise researcher, a member of the Los Angeles Police Department, and others.

Correction: Obama’s final State of the Union address will be in 2016.