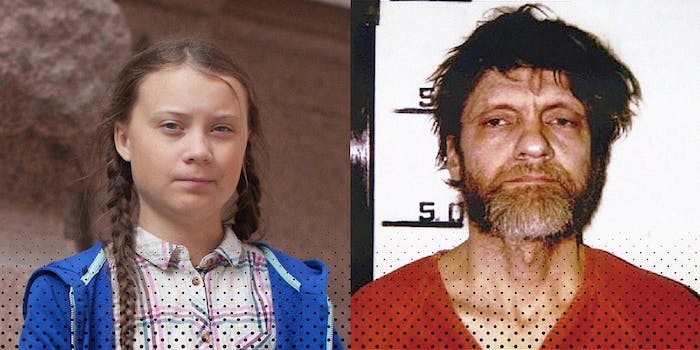 The claim alleges that Thunberg is a fan of Ted Kaczynski's writings.

A prominent Hollywood gossip blogger has claimed that Swedish climate activist Greta Thunberg has been communicating with Ted Kaczynski, better know as the Unabomber.

The allegation was made on Sunday by the self-described Hollywood lawyer known as “Enty,” who anonymously runs the famous “Crazy Days and Nights” blog.

Over the last 15 years, Enty has made a name for himself by outing celebrities he claims are tied to prominent scandals. Enty has been credited with, among other things, dropping details about disgraced producer Harvey Weinstein years prior to his public undoing.

In his most recent post, which it says came from a reader, Enty alleged that “authorities” recently intercepted mail sent by Thunberg to Kaczynski, who is behind bars after killing three people and injuring 23 others between 1978 and 1995 as part of a nationwide bombing campaign.

“The authorities have intercepted correspondence between two people – A young foreign woman who has been in the news a lot the last few years for speaking her mind on a particular problem and an infamous individual whose time in the public eye was before she was born,” Enty writes.

The blog goes on to state that Kaczynski, who is at first referred to as the “infamous individual,” had caught the attention of Thunberg due to his writings.

“The infamous individual wrote something a long time ago that became public that the young woman agrees with,” Enty adds. “She has been discussing both theory and implementation with him in the letters.”

Kaczynski famously sent a manifesto to media outlets titled “Industrial Society and Its Future” amid his bombing spree in 1995, which saw victims targeted by explosives in the mail.

Kaczynski, who described himself as an anarchist, argued in the essay that the “Industrial Revolution and its consequences have been a disaster for the human race.” Kaczynski ultimately advocates for an end to technological progress and a return to primitive living.

A 2018 article from the New York magazine asserts that Kaczynski is viewed by many among the green anarchist and eco-extremist movements as a prophet-like figure to this day.

The Daily Dot reached out to the Crazy Days and Nights blog to inquire further about his claims regarding Thunberg and Kaczynski but did not receive a reply by press time.

Kaczynski, who is currently 78 years old, was arrested in 1996 and is currently serving eight life sentences without the possibility of parole at a prison in Colorado.

The Daily Dot likewise reached out to USP Florence ADMAX, the prison where Kaczynski is being held, to ask about the claims, but did not receive a reply either.