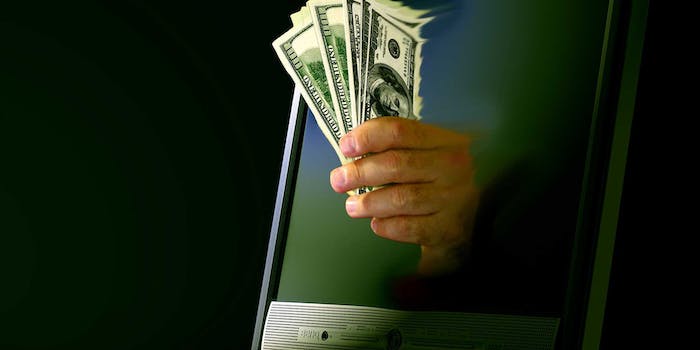 The Great Fed Robbery is a lesson in finance, physics, and ethics

Either Wall Street has discovered something faster than the speed of light, or someone just pulled off one of the biggest scams in financial history.

According to reports by CNBC, the Federal Reserve is looking into how investment firms were able to place several large orders on exchanges located in Chicago two to three milliseconds—that is, two or three thousandths of one second—after the Fed announced it was going to continue its mass bond purchasing program unabated. Traveling at the speed of light, it would take a bare minimum of seven milliseconds under the best conditions for that information to reach Chicago from where the announcement was made in Washington, D.C.—meaning, unless investment banks have discovered how to break the laws of physics, there might be something shady going on.

One possible culprit being investigated by the Fed is the gaggle of financial reporters who were given access to information about the bank’s not-yet-announced actions in a sealed room shortly before the public at large so they could write their stores slightly ahead of time. However, these reporters were prohibited from making any contact with the outside world until the information’s official release at 2 pm last Wednesday.

The Fed’s announcement shot the price of stocks, bonds, and gold immediately upward. In light of widespread expectations that the Fed would instead begin to taper its economic stimulus efforts as the economy improved, anyone who knew the Fed’s actual plan before everyone else could have easily front-run the market.

According to Nanex, the market research firm that discovered the irregularity, the first 10 milliseconds after 2 p.m. were the 10 most active milliseconds of trading in the history of the U.S. stock and futures markets. By some estimates, over $600 million in assets changed hands on the Chicago exchange in those first few milliseconds alone.

“Too bad the bad guys on Wall Street who pulled off The Great Fed Robbery didn’t pay attention in science class. Because hard evidence, along with the speed of light, proves that someone got the Fed announcement news before everyone else,” wrote Nanex in a blog post. “There is simply no way for Wall Street to squirm its way out of this one.”

“This is not a bad technology case. This is a somebody’s-hand-is-in-the-cookie-jar case,” Nanex founder Eric Hunsader told Quartz. “The Fed news was leaked to, or known by, a large Wall Street Firm who made the decision to pre-program their trading machines in both New York and Chicago and wait until precisely 2 PM when they would buy everything available … It is somewhat fascinating that they tried to be ‘honest’ by waiting until 2pm, but not a thousandth of a second longer.”

As CNBC notes, there is also a possibly more innocent explanation. If one of the news agencies with early access to the info moved its story about the Fed’s actions to a server nearer to Chicago and then hit publish exactly at 2 pm, that could explain the shorter than expected gap.

CNBC adds that, “it is not clear whether that would violate the Fed’s rules.”

In a world where computer-assisted high frequency trading makes up the vast majority of market activity, getting a piece of information even a fraction of a second before your competitors is enough to get ahead of the market and make a mint.

To this end, investment firms have entered into an arms race to ensure that potentially lucrative information put out in one location makes it to their servers across the globe as fast as possible. A $300 million low-latency trans-Atlantic cable between London and New York is expected to shave six milliseconds off an informational round trip back-and-forth across the pond. As ExtremeTech reports, some firms are even looking into microwave or laser networks to move information even faster.

All of the controversy about “The Great Fed Robbery” has led some commentators to question the ethics behind the whole high-frequency trading revolution that’s taken over Wall Street.

In just the past 48 hours, a Washington Post columnist labeled high-frequency trading a “dead weight loss to society,” Mother Jones called for a small tax on financial transactions designed to cut down on the preponderance of the practice, and crusading New York Attorney General Eric Schneiderman gave a speech officially declaring war on high-frequency traders who play fast-and-loose with the rules.