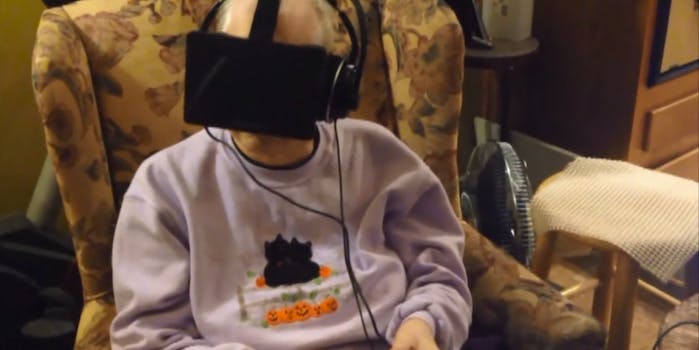 The virtual reality device game her one final stroll outside.

A woman with only months to live was given one last chance to go outside with a little help from Oculus Rift.

Roberta Firstenberg was losing her battle with cancer when she revealed one of her final wishes to her granddaughter Priscilla. She wished that she could go outside, even if it was only in her front yard.

Priscilla, a 2D and 3D video game artist, sent a note to the Oculus Rift support team last November asking for help. The virtual reality system, recently purchased by Facebook, was known more for gaming and entertainment, but the team read her story and sent a dev unit right over.

For Firstenberg, it was a quiet escape where she could experience simple things like walking up the stairs. And after testing out the initial Tuscany Villa demo, Priscilla started loading other images to the virtual reality device.

Firstenberg died about four weeks later, but at least she got one final opportunity to see the outdoors.