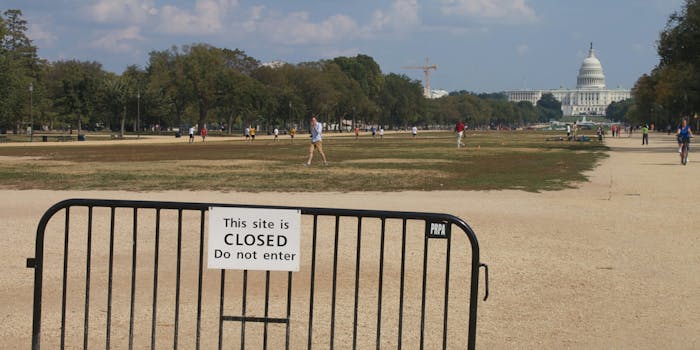 Government shuts down begins after Congress fails to reach deal

Negotiations went late into the night.

After Congress failed to reach a deal late Friday night, the United States government shut down.

Republicans and Democrats were unable to reach an agreement over government funding, stymied by the status of young immigrants who were part of the Deferred Action for Childhood Arrivals (DACA) program.

As the deadline approached, Senate Republicans forced a vote to try to keep the government open until Feb. 16, knowing that they didn’t have support to get the deal through, using it as a way to place blame on Democrats. Online, the RNC and prominent Republicans had already been branding it the Schumer Shutdown, calling out the Senate Minority Leader.

The vote, as expected, failed to garner the 60 votes in the Senate needed. Just 50 senators voted in favor of the bill.

Late Friday, President Donald Trump tweeted that the possibility of keeping the government open was “not looking great.”

Not looking good for our great Military or Safety & Security on the very dangerous Southern Border. Dems want a Shutdown in order to help diminish the great success of the Tax Cuts, and what they are doing for our booming economy.

Earlier, House Republicans forced through a vote on Thursday night to keep the government open until Feb. 16 by a 230 to 197 margin.

Trump himself came out in support of another short-term spending bill to avert the shutdown earlier in the day.

Excellent preliminary meeting in Oval with @SenSchumer – working on solutions for Security and our great Military together with @SenateMajLdr McConnell and @SpeakerRyan. Making progress – four week extension would be best!

That apparently wasn’t enough, despite Republicans controlling both houses of Congress and the presidency.

Even with that majority, the government shutdown was somewhat expected. Trump made DACA a political lightning rod when his administration shut down the program, which shields young undocumented immigrants who entered the United States as children from deportation for two years after undergoing an application process. Trump also once tweeted that the government needed a shutdown to “fix mess.”

The White House gave Congress a March 5 deadline to pass a “fix” for DACA, making it an easy bargaining chip for Democrats hoping to get some sort of codification in exchange for the government spending bill. Trump had hoped that a DACA “fix” would be tied to funding for his much-discussed border wall. Neither, though, could come to an agreement. A deal for that was almost in place, but it was scuttled by Trump’s “shithole” comments.

Essential operations of the government, including the military, still function during a shutdown. The TSA and Post Office also run as normal. Federal national parks, museums, and monuments will close as a result of the shutdown.

You can read more about how the shutdown will affect you here.