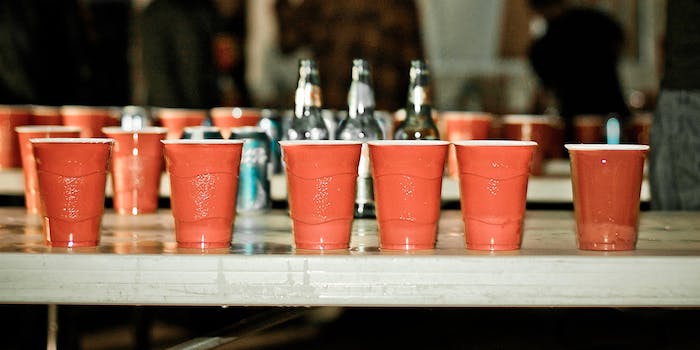 Washington is not a city know for its proclivity to party. There are inauguration balls, fundraising dinners, foreign policy-themed artisanal cocktail parties, and, of course, nerdprom. But our nation’s capitol doesn’t have the same reputation for raging your face off as does New York, where bars close at 4am, or Las Vegas, where bars close whenever you run out of money.

But this image is undeserved. Washington, and the federal employees who inhabit it, can party just as hard as anyone else—often on the taxpayer’s dime. Here are some of the political scandals to prove it.

A recent report by the Department of Justice’s Office of the Inspector General found that a group of DEA agents stationed in Columbia treated their time abroad as an extended, debauched spring break. The report charged that agents had “sex parties” with prostitutes while local police guarded their firearms, laptops, and other official gear. All of this sounds expensive: How were the agents able to afford to pay for sex parties on a humble government salaries? The report noted that three of the agents being investigated were “provided money, expensive gifts and weapons from drug cartel members.”

U.S. Air Marshals are tasked with going undercover as airplane passengers and ensuring no planes get hijacked on their watch. However, according to an investigation by the Center For Investigative Reporting, the agency’s actual activity is more like a combination of a travel agency providing free flights wherever top officials wanted to go and “a giant flying fraternity party.”

The agency’s bosses reportedly used the program to jet to Scotland for golf trips or meet romantic partners at exotic locales. There were even reports that a flight schedule coordinator traded sexual favors for giving agents more desirable assignment. “When you hire a bunch of eager beavers, give them some of the best training money can buy, tell them that they’re heroes and then they fly hundreds of uneventful missions without making any arrests… they’re going to seek conquests elsewhere,” former air marshall and whistleblower Robert MacLean told CIR.

It’s kind of unfair to compare other arms of the federal government to the Secret Service. Sure, the Treasury Department’s Financial Crimes Enforcement Network has been known to get down on occasion (maybe); but, based on recent headlines, the Secret Service has three jobs: protect the president, stop counterfeiters, and party as hard as humanly possible.

Earlier this year, a pair of senior Secret Service agents drunkenly crashed a car into a White House barricade after leaving a booze-soaked retirement party for the service’s longtime spokesperson.

In 2013, an agent was removed from the president’s security detail after he attempted to break his way into a woman’s room at Washington’s tony Hay-Adams hotel because he wanted to retrieve a stray bullet he had accidentally left in the room somehow. And then: remember those DEA agents in Columbia with all the sex parties? They also arranged covert liaisons with local prostitutes for Secret Service agents when they were accompanying President Obama on a 2012 visit to the South American nation.

The Secret Service’s tendency toward letting it all hang out goes back over half a century. When the Warren Commission looked into the Kennedy assassination, they found that the Secret Service agents tasked with protecting the president were drinking the night before he was shot. While the report noted that the drinking didn’t contribute to Kennedy’s death, it was still against the rules.

Every year, the Minerals Management Service collects billions of dollars in revenue from oil companies. During the George W. Bush Administration, the agency also took bribes from those oil companies. They accepted tickets to golf, ski, and Toby Keith-watching trips from those same companies. Sometime they even had sex with people from those companies. Also, they had a bunch of drug-fueled soirees.

A scathing government report on the agency said its culture “appeared to be devoid of both the ethical standards and internal controls sufficient to protect the integrity of this vital revenue-producing program.”

The whole thing turned into a major scandal, and apt metaphor, for the Bush Administration.

In late 2010, Senior U.S. District Court Judge Jack T. Camp stepped down from the bench after after being busted by an undercover cop in Atlanta while attempting to buy drugs while in the company of an exotic dancer he had met at a strip club. He also admitted to possessing marijuana, cocaine, and Oxycodone. Camp was found guilty of partying too hard.