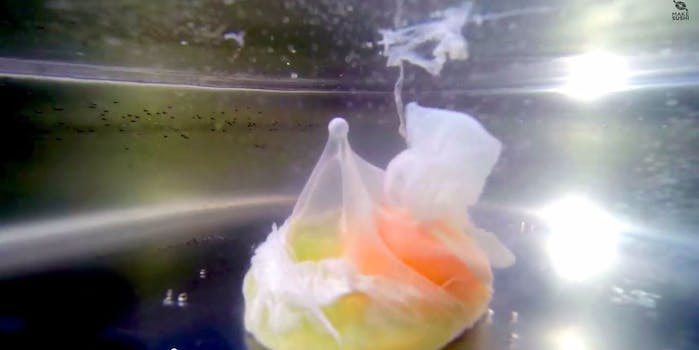 Man boils his GoPro just to film an egg

After the dishwasher stunt, this was the next logical step.

So far, we have seen the virtually indestructible GoPro camera survive everything from a sky-high plane fall to a run through the dishwasher. Now we know that the device can actually be boiled for a short time.

On the YouTube channel How to Make Sushi Japanese Food Recipes, redditor MakeSushi1 decided to share with the world what an egg looked like as it was poached underwater. So, he immersed his GoPro camera in the pot, turned up the heat, and managed to capture a particularly beautiful and mesmerizing video as a result.

In a Reddit thread about the video, MakeSushi1 explained what had happened with the camera.

“I placed the GoPro in the standard underwater case it comes with and, when the air inside the case got too hot, it expanded, causing the case to fracture [and] creating a leak; this was towards the end so as soon as it happened I pulled it out before much water could get in. Anyway, when I took it out the case the LCD screen was blacked out and the camera was very hot and unresponsive. Honestly thought I broke it, once it cooled down though it started to work again and to my surprise it now works fine and saved the video footage!”

I think MakeSushi1 got off light. Hopefully he keeps the GoPro away from the oven.

Screengrab via How to Make Sushi Japanese Food Recipes/YouTube