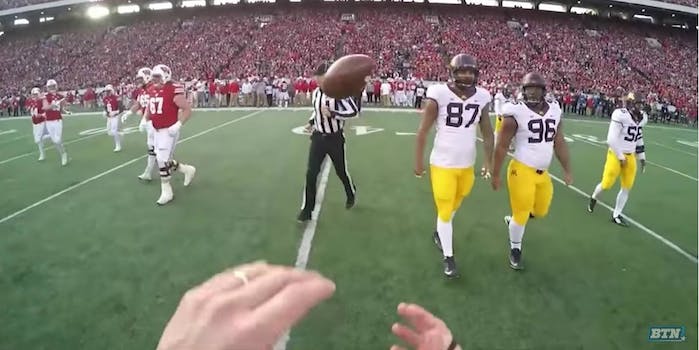 In game-changing move, NCAA to strap GoPro cameras to its refs for Big 10 championship

During Saturday’s Wisconsin-Minnesota football game, one official presiding over the contest wore a hat with a GoPro camera embedded in it. Apparently, that trial run was deemed enough of a success that a GoPro-totting official will be back in action this Saturday and will be filming for a much bigger audience: The nationally televised Big Ten championship game on Fox.

As TechCrunch reported, this is part of a new deal between Fox Sports Lab and the high-tech camera company, and the footage will be used by Fox to show on its broadcast and on its social media accounts.

Here’s what it looked like last week from the view of the game’s back judge.

While the GoPro could give the TV viewers a cool perspective of what’s happening in the middle of the field—not to mention the experience of skydiving into a stadium before the game actually starts—it’ll be interesting to note if the NCAA and/or the NFL could use this idea to help make replay challenge an even better vehicle for getting flawed calls corrected.