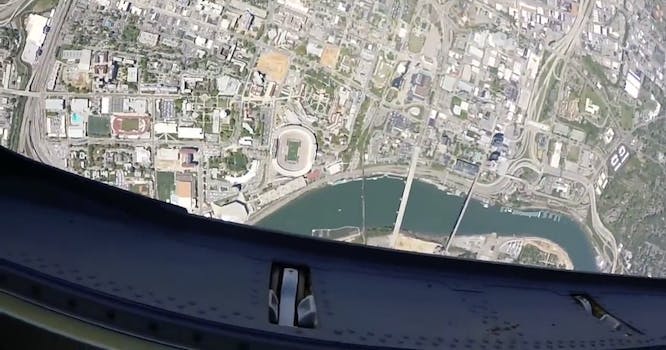 If you’re too scared to try skydiving for yourself, here’s the next best thing: a first-person view, captured by a GoPro, from Navy SEALs making the leap from a plane and landing inside a football stadium.

The video follows the Leap Frogs, members of the U.S. Navy Parachute Team, as they fall from the wild blue yonder into a sea of orange awaiting them inside Neyland Stadium at the University of Tennessee in Knoxville, TN.

The jump took place on April 16, 2016 and served as a kick off to the annual Orange vs. White Spring Scrimmage for the UT Volunteers football team. It also marked Knoxville Navy Week, one of the Navy’s signature outreach programs that it takes each year to a handful of cities throughout the country.

The Orange team emerged victorious in Tennessee’s spring scrimmage, outscoring the White squad by a score of 70-63. But the real winners here are the Leap Frogs, who get to pump up the crowd just by doing their job.