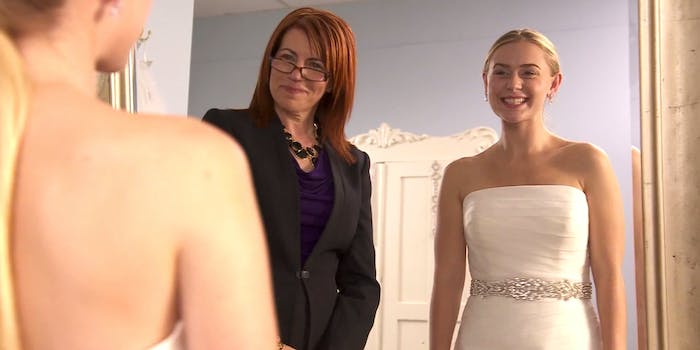 Everything about this is upsetting.

If any party is in touch with the needs of a young, 21st century female voter, it’s the GOP. After all, this is the party that wants to regulate a woman’s reproductive rights like it’s big oil, and what young lady isn’t excited by that prospect?

But for all you young female Florida voters that still remain undecided, the College Republican National Committee has created a commercial to sway you to vote for a gorgeous ivory empire waist wedding dress. Did we mention that dress is also Florida Gov. Rick Scott? He’s a man so gifted he can be both a politician and a chic mermaid silhouette gown.

In the CRNC’s latest tv ad spot, which spoofs TLC’s Say Yes to the Dress, Rick Scott is the best choice for office. He also hugs Brittany’s figure in all the right places. The other choice, Charlie Crist, is dated, unflattering, and made from material that looks highly combustible. He should not be your state’s next leader or worn when walking down the aisle.

Ladies, as you enter the voting booth, just remember that Rick Scott wants you to wear him like he is a piece of expensive and luxurious clothing. Oh, and he also wants to be keep being governor.