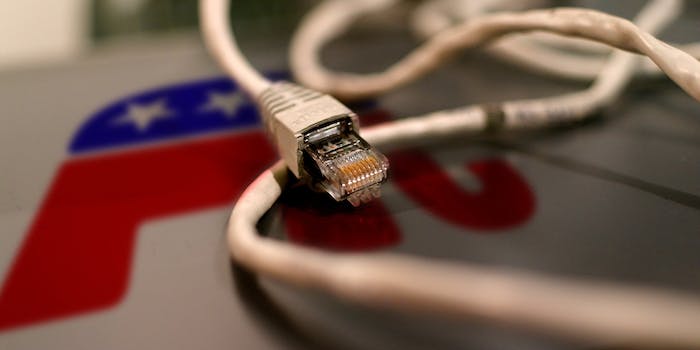 It’s still unclear which GOP presidential candidate the Republican National Committee will be rallying behind in the 2016 general election. But in the meantime, the RNC appears to have a pretty clear idea of which candidate it’ll be running against.

According to a recent filing with the Federal Elections Commission, the RNC is already spending big money on Internet ads opposing the candidacy of former Secretary of State Hillary Clinton, the Democratic frontrunner in 2016. On April 12, the same day Clinton officially announced her campaign, the RNC publicly declared more than $100,000 in media ad buys on various social and conservative websites.

Though it’s just a fraction of what the RNC will spend on total ad buys in 2016, this six-figure splurge right out of the gate seems to show just how seriously the Republican party is taking Clinton’s candidacy as well as the roll of online media in reaching voters.

The RNC spent $50,000 alone on Facebook ad buys, according to the FEC filing, more than it did for any other website. This reflects the powerful reach of Facebook, which some 71 percent of all Internet users are on, according to a Pew survey from last year. It’s also indicative of just how political our newsfeeds have become, as the newsfeed algorithm shoves more and more partisan content in our faces.

The second-biggest Internet ad buy from the RNC may surprise you. The committee spent $20,000 to put anti-Clinton ads on Pandora. It may seem odd, but in actuality the music streaming service has done a lot to court political advertisers in recent years (perhaps in an effort to make itself just as annoying as conventional radio during an election year). Last year Pandora began offering a new service to political groups by using user zip codes and music preferences to determine probable political leanings.

Among other ad buys, the RNC has spent $2,000 on Microsoft Online Inc., $10,000 on Google, and $1,000 on Twitter. The committee has also spent $15,000 on the Independent Journal Review, a conservative alternative to Upworthy. It also spent $8,500 with BrightRoll, a subsidiary of Yahoo! that places online video ads.

This is only a sliver of what will be spent during the 2016 election, which could be the most expensive presidential election in history. CNN reports that the Clinton campaign itself could cost up to $1.7 billion over the next year and half.

Meanwhile, outside groups unleashed by the Supreme Court’s Citizens United ruling will be able to flood the 2016 race with donations. In January, it was reported that the Koch brothers plan to spend $889 million in the coming election cycle in support of conservative candidates.