Joshua Black has some big, bad ideas—and he's not backing down.

Joshua Black, a Republican Florida House candidate for District 68, appears to do little besides retweet far-right sentiment for the benefit of his 1,158 followers. That hobby has now caught up with him, or at least earned him a few moments in the glare of national media: After he endorsed the hanging of President Barack Obama on MLK, Jr. Day, the Secret Service paid him a visit.

It’s hard to imagine that Black, an African-American, was unaware of the ugly juxtaposition of lynching imagery with a holiday about social equality and justice. But even after his brush with Homeland Security feds, plus unequivocal condemnations from Gov. Rick Scott and Republican Party of Florida Chairman Lenny Curry, he hasn’t dropped out of his race or party. He did, however, step down as a liaison with the Pinellas County Republican Executive Committee—the same day the Secret Service dropped by. (The offending tweet still stands.)

Floridians expect more from our leaders & he should immediately withdraw his candidacy to represent families of Pinellas County. (2/2)

@prestonrudie yes. That garbage does not represent the values of the people I know whether R,D or I.

If anything, Black has ramped up his Twitter attacks on Obama since becoming a focus of attention, standing his ground on accusations of death threats and self-loathing racism.

@evil_bastard Yes. And left. I didn’t break the law. I never threatened the President.

@evil_bastard Oh well. I don’t break the law. Unlike the President.

@chuckheffernan Did you say that when they were hanging Bush in effigy?

He’s also retweeted quite a few remarks of support.

@JoshuaBlack2014 you have my vote sir…but I live in Virginia. It’s refreshing to have someone with backbone in politics.

@joshuablack2014 How dare you say what the American public thinks of obama what do you think this is a representative gov? #impeachobama

Black’s Facebook page, meanwhile, has mostly stuck to its pro-life, anti-premarital sex agenda, though commenters are mostly interested in attacking or defending his stance on Obama’s prosecution as a tyrant warlord. Because as a member of Florida’s House of Representatives, he’ll definitely be in charge of that. Who better? 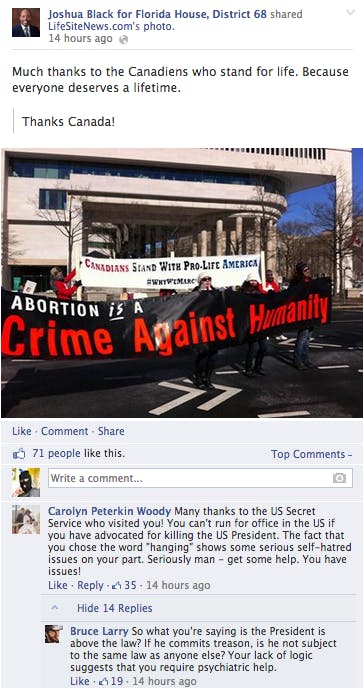