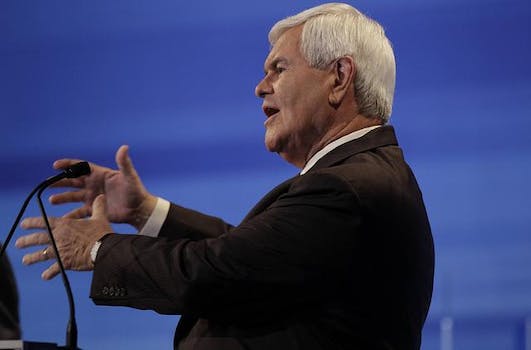 In seemingly the 4,000th debate since the 2012 election campaign kicked off, a timely and relevant topic was finally discussed.

During the South Carolina battle, Newt Gingrich, Mitt Romney, Ron Paul, and Rick Santorum all expressed their disdain for the Stop Online Piracy Act (SOPA), claiming that the legislation would have a devastating effect on Internet freedom.

Moderator John King asked the candidates a question posed by Twitter user michaelbrowne11: “What is your take on SOPA, and how do you believe it affects Americans?” King gave a brief explanation of the bill, adding that CNN’s parent company Time Warner says a law like SOPA is needed, since “some of its products, movies, programming, and the like, are being ripped off online.”

The question was first directed to Gingrich.

You have virtually everybody who is technologically advanced, including Google and YouTube, and Facebook and all the folks who say this is going to totally mess up the Internet. And the bill in its current form is written really badly and leads to a range of censorship that is totally unacceptable. Well, I favor freedom. And I think that if you—I think we have a patent office, we have copyright law. If a company finds that it has genuinely been infringed upon, it has the right to sue. But the idea that we’re going to preemptively have the government start censoring the Internet on behalf of giant corporations, economic interests, strikes me as exactly the wrong thing to do.

Romney agreed with the former House Speaker, claiming the law is “far too intrusive, far too expensive, far too threatening, the freedom of speech and movement of information across the Internet. It would have a potentially depressing impact on one of the fastest growing industries in America, which is the Internet, and all those industries connected to it.”

Paul rightfully claimed to be “the first Republican to sign on with a host of Democrats to oppose this law.” While he claims SOPA is not going to be passed into law, he warns that similar legislation will be proposed in the future.

Santorum also spoke out against SOPA, though he believes that “something proper should be done” to further protect the intellectual property of U.S. citizens.

Combined with President Obama’s stance against SOPA, the Republican presidential candidates’ opposition to the bill should help kill it, as many who participated in Wednesday’s mass online protest wish to happen. Indeed, it appears that backing for the bill is waning among politicians.

There were 80 Congress members who supported SOPA and its cousin Protect IP Act (PIPA) at the beginning of Jan. 18, with 31 opponents, reported ProPublica,. The opposition to the legislation soared to 101 Congress members, with 65 supporters, following Wednesday’s protest.

According to redditor Earache423, who is working for a senator, it also seems the public outcry and angry phone calls are having a strong effect on politicians’ stances on the matter.