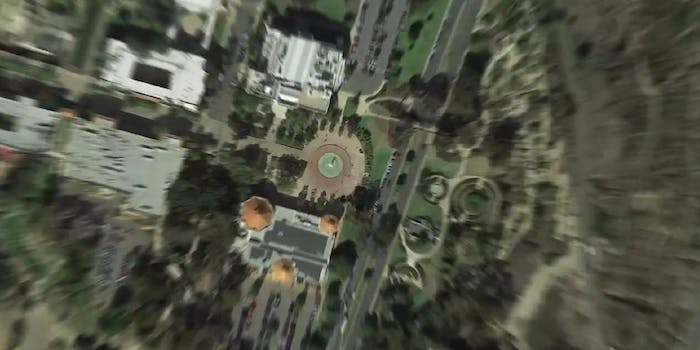 Get your headphones ready.

A nifty new JavaScript experiment drapes a whole new sensory experience on top of Google Maps Street View, the feature that provides a first-person visual perspective of just about any location around the world.

While you can already plop Street View’s avatar down and turn a 2D Google Map into a navigable 3D environment, “Sounds of Street View” lets you move through the sounds of a given location instead of just the images. The “explorative sound experiment” is spearheaded by Amplifon, which released its toolkit for other sonic pioneers on GitHub.

It’s a difficult effect to explain, and one best experienced with headphones. As Amplifon explains:

“Utilising the Web Audio API platform, sounds are designated as though they were ordinary Google Maps markers. It is a framework which allows developers across the planet to craft their own sound adventures for the rest of the world to enjoy.”

In other words, you’re actually moving through the ambient, geotagged sounds, which get softer or louder depending on where you point your cursor. For now, the experiment is limited to three locales—Place du Palais in Avignon, France; Hapuna Beach, Hawaii; and Balboa Park in San Diego—but it shows the kind of playful digital synesthesia that these sorts of tools make possible.

Amplifon – Sounds of Street View from Amplifon UK on Vimeo.