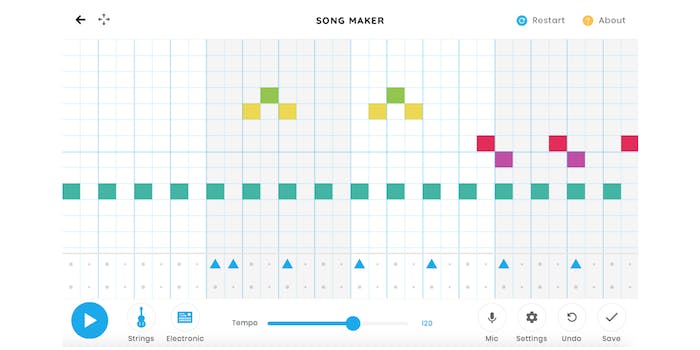 BRB while we test this out.

If your Friday has been a little too productive, has a fix. Google Chrome’s new Song Maker is an absolutely delightful time waster, er, educational tool that lets you create songs in your browser. Built by Google’s experimental Chrome Music Lab, it’s easy to use and incredibly fun.

To give it a shot, head here. This brings you to the Song Maker website, a grid with various controls along the bottom of the screen. These controls include a pause/play button, the ability to change the tone of the instruments you’re composing with (marimba, strings, or piano, for example), a slider for adjusting the tempo, and undo and save buttons.

You then compose music by tapping squares in the grid onscreen. Each square turns a different rainbow hue once clicked, and plays a certain note. Higher notes are at the top of the screen, lower notes toward the bottom. With these tools at your disposal, you can click around to create a song that’s either acoustically delightful or a visually stunning rainbow grid. If you’re lucky, it may be both.

Excited to share our new #ChromeMusicLab experiment Song Maker! Here are example songs I made (links below so you can play with any of them). Try it here → https://t.co/02HgpdooIL #songmaker pic.twitter.com/8e6X2KSoy1

Song Maker is robust enough that you can even use it to make real songs (or song snippets). One user tried Aha’s “Take On Me,” which you can check out below.

A bit of ‘Take on me’ on Google #SongMaker:https://t.co/nyARtoRdeA

While I’m feeling rather embarrassed about the paltry beats I mixed up myself, it is inspiring to see the creations that such a deceptively simple tool is capable of.

If you’re feeling musically motivated, you can hit up the Chrome Music Lab’s website and sample the other musical tools the team has developed. Google Chrome Music Lab has 13 projects you can try. They’re all designed to make music education more fun and hands-on. The Spectrogram is trippy, and the Chords tool is useful for understanding some musical theory. Song Maker, however, may be its best experiment yet.