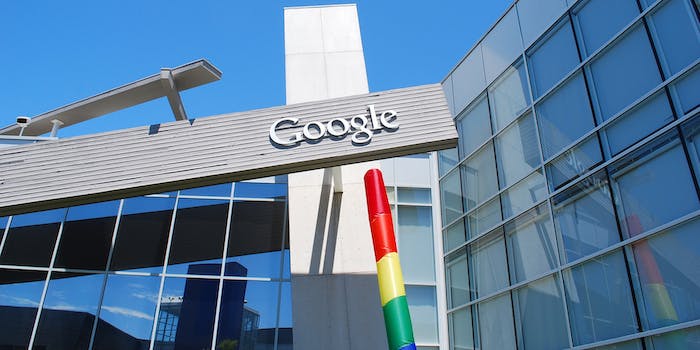 Google's tendrils reach into so many areas that increased lobbying was practically inevitable. But the scale is still staggering.

When you think about politically active corporations, a few obvious examples come to mind. There are defense contractors like Lockheed Martin, energy firms like Exxon Mobil Corp., and conglomerates headed by libertarian billionaires like Koch Industries. But data compiled from disclosures provided to the Office of the Clerk of the U.S. House of Representatives shows that the company spending the most money on lobbying is none of these traditional giants. Instead, it’s Google.

During the first quarter of 2015, Google spent $5.4 million lobbying the federal government, an increase of 43 percent from the same period last year, according to the data analyzed by the government transparency group MapLight.

A handful of groups spent more in the same period—in some cases considerably more—but nearly all of them were trade organizations representing various industries or the business community as a whole. The single largest spender was the titanic U.S. Chamber of Commerce, which doled out $13.8 million for lobbying purposes. The National Association of Realtors spent $7.8 million, the American Medical Association spent $6.7 million, and the U.S. Chamber Institute for Legal Reform, a Chamber of Commerce offshoot, spent $5.7 million.

The second biggest spender among individual corporations was General Electric, a firm that has long been a major political power player. Google’s rise, on the other hand, is a relatively recent phenomenon. In all of 2008, the company only spent $2.8 million on lobbying. That number has grown almost every year since. In 2014, Google shelled out $16.8 million on lobbyists.

The $5.7 million the company has spent so far this year is a single-quarter spending record, putting the search giant on track to easily shatter all of its previous spending totals.

It should be noted that these figures—representing the amount of money Google has paid lobbyists to advocate on its behalf—are separate from donations that the company has made directly to candidates, political parties, super PACs, and politically focused non-profit organizations. Since 2008, Google has spent $74.5 million on lobbying and given out an additional $10.2 million to politicians and political groups.

For much of its history, Silicon Valley has had an aversion to Washington, preferring both to be left alone to innovate and to avoid the messy tangle of partisan politics. But as companies like Google stretch their tendrils into an increasingly diverse set of economic sectors, the need to influence the thinking of America’s decision makers has become paramount.

Google did disclose, at least in broad strokes, the list of issues on which it lobbied. While there may be some overlap between multiple concerns, the vast array of topics on which Google has lobbied offers a window into the enormous range of its current activities.

Representatives from Google did not respond to a request for comment.

Correction: Lobbying disclosures were compiled from the Office of the Clerk of the U.S. House of Representatives.